Identity Politics Ushers in Guilt Without Vice, Innocence Without Virtue 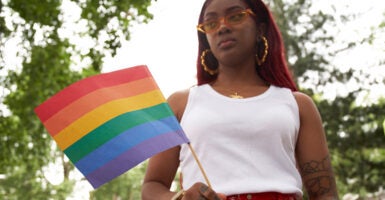 The subject of Joshua Mitchell’s admirably astute book is—in the words of his subtitle—“identity politics and other afflictions of our time.” (Photo: We Are/Getty Images)

Daniel J. Mahoney holds the Augustine Chair in Distinguished Scholarship at Assumption University. For the 2020-2021 academic year, he is a visiting fellow in Princeton University's James Madison Program.

Georgetown University political theorist Joshua Mitchell has written that rare book that captures the state of our souls and describes our situation with clarity, astuteness, and spiritual depth.

“American Awakening: Identity Politics and Other Afflictions of Our Time” (Encounter) is a book that expertly combines classical political philosophy with penetrating cultural diagnosis in a manner that holds up a revealing mirror to the great afflictions of our time. At the same time, Mitchell admirably avoids narrow partisanship and undue polemics.

His book deserves to be compared to such memorable achievements as Raymond Aron’s “The Opium of the Intellectuals” (1955), Philip Rieff’s “The Triumph of the Therapeutic” (1966), and Allan Bloom’s “The Closing of the American Mind” (1987)—enduring works that combined theoretical penetration with analyses of our civilizational crisis.

Mitchell’s subject is, in the words of his subtitle, “identity politics and other afflictions of our time.” Readers expecting either accommodation to the regnant civil religion of “transgression and innocence” or an angry ideological screed should look elsewhere. Mitchell aims higher.

With impressive lucidity, he painstakingly examines a new secular religion that is profoundly indebted to Christianity while having “no place for the God who judges or the God who forgives.” Such an approach, he shows, is necessarily cruel, dogmatic, indiscriminate, and unforgiving.

The partisans of identity politics reject both the Christian understanding of original sin—the observable fact that no human beings are born without sin and all stand in need of forgiveness and redemption—as well as what Mitchell suggestively calls “liberal competence.”

This is the confidence that individuals endowed with free will and conscience are moral agents who, with the appropriate education and encouragement, can make their way responsibly in the world.

The theoreticians of identity politics derive from Christianity a belief in an “invisible spiritual economy,” but they understand that economy through a doctrinaire conception of transgression and innocence tied to visible groups who are guilty or innocent not because of what they have done but because of who they are.

White, heterosexual men, even “the least among” them, to echo the language of Scripture—the poor, the addicted—are said to be essentially, ontologically guilty. Blacks, women, and persons who identify with the ever-expanding ideological construction called LGBTQ+ are by definition innocent, and forever so, or so it is claimed.

As Mitchell shows, the permanently guilty must resort to “virtue signaling” of the most demeaning sort if they are to avoid “cancellation” or other rituals associated with public humiliation. Not only God but also forgiveness and the whole economy of mutual reconciliation and accountability are thus absent from this “identity-politics accounting scheme.”

Identity politics claims to be egalitarian, but in truth it radically separates human beings in a manner only previously seen in the totalitarian ideologies and regimes of the 20th century.

Identity politics sees no struggle between good and evil in every human heart, as in the classical and Christian understanding of free will, conscience, and moral responsibility. It has no place for the drama of human existence.

Like the totalitarians of old, in numerous institutions in civil society, especially our universities, the new ideologues pronounce who is absolutely guilty—and who is innocent and pure—with a monstrous self-assurance based on the visible signs of evil and injustice (e.g., whiteness and “heteronormativity”).

Such a world—at once racialist and ideological—becomes a perverse spiritual despotism dominated by tyrannical ideological clichés that allow the woke to dispense with “the guilty” with remarkable impunity and cruelty.

The old Christian anthropology cohered naturally with the requirements of liberal competence and civic responsibility since in a “mixed world of purity and stain,” imperfect human beings had to strive to “build a world together,” doing their best to respect one another as persons made in God’s image.

Identity politics inexorably leads to soft or not-so-soft despotism, as the ontologically guilty are swept away and those who “cover themselves with the fig leaf of innocence” become the beneficiaries of an omnicompetent (and arbitrary) state that “allocate[s] resources to the innocents and to their causes.”

Civic responsibility and moral accountability thus have no place in the ideological schemes put forward by the denizens of identity politics. Such a regime—and we are indeed in the process of creating a radically new political order—is at once anti-Christian (or anti-biblical) and profoundly anti-liberal. And it wars with every aspect of our moral and civic inheritance.

Mitchell thus intimates that religious believers, partisans of liberal competence, and conservative defenders of our moral and cultural inheritance put aside their differences and come together to defend the conception of liberty and responsibility, under God, that properly undergirds a free society.

This is the old American synthesis, and it remains eminently worth defending. It is open to men and women of all races since it alone affirms “common humanity.” There is in truth no viable alternative that can sustain liberty and human dignity in a free republic.

Identity politics creates an atmosphere of division and disdain with more than its share of Orwell’s ritualistic “Two Minutes Hate” from his novel “1984.” No one is truly protected from new rounds of repudiation and cancellation. New purge trials undoubtedly await those who play with ideological fire since the innocent can become transgressors at the drop of a pin.

Mitchell shows with great sensitivity that black Americans are among the principal victims of this new ideological dispensation: The “innocent” are always to be treated as “victims,” as persons bereft of moral and political agency.

Drawing on the insights of the Christian and conservative intellectual and community activist Robert Woodson, who is black, Mitchell demonstrates how this newly dominant narrative hurts the most vulnerable by erasing all the “remarkable models of self-help” in black communities.

Gone is the example of those “accomplishments of black entrepreneurs and mutual aid societies during the most brutal racial repression and slavery.”

Black intellectuals such as Woodson are treated as the enemy precisely because they defend a Christian view of sin and responsibility, an authentically liberal notion of civic competence and self-help, and proper pride in the capacity of black Americans to be self-governing citizens in the most capacious sense of that term.

Look, Mitchell says, at what has happened to Booker T. Washington, whose message of determination and self-help is central to the restoration of liberal competence in communities wracked by crime, violence, and despair.

Washington, once a hero to black and white Americans alike, has become more or less a non-person, dismissed out of hand by the guardians of ideological correctness. This, too, hurts “the least among us” and substitutes permanent grievance for the faith in one’s God-given gifts that allows a common world to be built and to flourish.

There is no shortage of memorable gems in Mitchell’s inviting and challenging book. He has choice words to say about the “bipolarity” of the young, torn between unreasonable expectations that they can change the world and fear of the most humanizing face-to-face encounters with other human beings.

He ably chronicles the numerous “substitutes,” as he calls them, that we late moderns turn to—drugs of all sorts, among them—to find happiness divorced from competence and responsibility.

In doing so, Mitchell redeems political philosophy as the truly “architectonic science,” as Aristotle famously called it, the one that knows the city and soul in the most comprehensive way.

In the final words of “American Awakening,” Mitchell reminds us, in light of the coronavirus, that the “prudent wish to protect” lives has nothing to do with creating “a world freed from the curse of death,” an essentially utopian aim that infantilizes free men and women by aiming to create a world without risk or responsibility, with no higher or nobler goal than self-preservation.

It is a world where we defer in a supine way to self-described “experts” and prohibit public worship while permitting allegedly “essential” pursuits.

Mitchell has written an anti-totalitarian classic in the guise of a critique of identity politics (although his book very powerfully provides that service, too).

The essential lesson is clear: There is no liberty, human dignity, or moral and civic responsibility without a clear recognition that “the line dividing good and evil cuts through the heart of every human being,” in the inestimable worlds of the Russian writer Aleksandr Solzhenitsyn.

To deny that elementary moral fact is to negate the foundations of a free society—and to succumb to the ideological lie at the heart of every totalitarian regime and ideology. Mitchell’s welcome book shows us precisely what is at stake, and not a minute too soon.

This article first appeared in RealClearBooks.