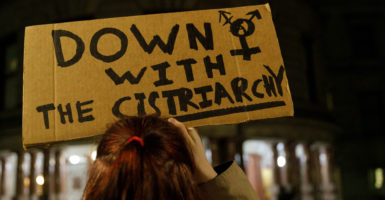 Is there an answer to the problem of identity politics in America? For some, the “solution” is direct.

“We need to take on the oppression narrative,” conservative commentator Heather Mac Donald said at a Heritage Foundation gathering on Capitol Hill.

Americans need to “rebut” the idea “that every difference in American society today is the result by definition of discrimination,” Mac Donald said during the event Monday, called “Identity Politics Is a Threat to Society. Is There Anything We Can Do About It at This Point?”

Without challenging this overarching narrative, the Manhattan Institute fellow said, “there is going to be no end to identity politics.”

The rise of identity politics has become a phenomenon not just in America, but in the West in general.

In many ways, debates over identity are defining and shaping the politics of our time and pose a unique challenge in particular to the United States, a vast, multi-ethnic country with potential identity fault lines that far exceed the more homogenous societies of the world.

Mike Gonzalez, a senior fellow at The Heritage Foundation, and Mike Franc, director of D.C. programs at the Hoover Institution, brought together a diverse set of thinkers to hash out why identity politics is on the rise and how to address it.

Each highlighted the problem.

Hudson’s Fonte outlined what has become the framework for identity politics on the left.

“Multiculturalism, the diversity project, and critical theory” are the three major cornerstones of this creed, Fonte said.

In a 2013 article in National Review, Fonte described the “diversity project” as: “[T]he ongoing effort to use federal power to impose proportional representation along race, gender, and ethnic lines in all aspects of American life.”

Multiculturalism comes in a hard version and a soft version, he said.

The hard version, Fonte said, has damaged society. He concisely summed up its tenets:

The United States is a multicultural society in which different cultures—African-Americans, Hispanic-Americans, Asian-Americans, Native Americans, and women—have their own values, histories, and identities separate from and sometimes in opposition to dominant Anglo, white, male culture.

This creed divides America into many peoples and has become the dominant ethos taught in American schools.

The diversity project’s demand for statistical equality for groups, or “group proportionalism,” as Fonte calls it, is another integral element of identity politics. But taken to its logical extent, the diversity project is incompatible with a free society, he said.

There is simply no way to create perfect, equal representation of all groups in all fields, the Hudson Institute scholar said. Any attempt to do so would require state coercion on a massive scale.

Finally, Fonte said, critical theory—which explains the difference in group outcomes by classifying groups as privileged or marginalized—further undermines free society because it directly opposes the concept of “liberal, democratic jurisprudence.” Individual justice is subordinated to social justice—the oppressors and the oppressed.

These concepts fundamentally undermine our republic, Fonte said, and while he had no answer to solve the threat, he said a return to patriotism and national identity was a better way forward.

Hoover’s Berkowitz reiterated the obsession of identity politics with “race, class, and gender.”

These classifications become the essence of who a person is, and subordinate individual differences and individual justice.

“Group rights are distributed on the basis of the discrimination or oppression that the group to which you belong has suffered,” Berkowitz said.

Thus, he said, victimhood becomes a “virtue” and a moral status symbol demonstrating that one deserves greater political power.

Distinctions exist between the postmodernist ideologies of the 1980s and 1990s and the early 21st century, he said. A key feature defining the identity politics of today is that it has moved on from the relativism of earlier eras and become dogmatic in its certainties.

Identity politics adherents on the left, for example, are now certain in their assessment that the West—including America—is racist and sexist.

Dissent from this narrative is taken as “an act of violence, an expression of racism and hatred,” Berkowitz said.

These ideas not only have become dominant on college campuses, he said, but are a threat to the fundamental nature of liberal societies. They cannot coexist with concepts like free speech, due process, and limited government.

American universities won’t counteract the identity politics creed, Berkowitz said, and so Americans who oppose it need to find outside solutions if they want to preserve their free society.

Berkowitz, who has written extensively about restoring the value of liberal education, said such solutions may come through alternative paths to education at the K-12 level—homeschooling and charter schools—as well as more programs to provide alternative curricula to parents and young people.

Lind spoke about how identity politics is becoming a flashpoint for the most fundamental divides not only in the U.S., but throughout the West.

Half of America—mostly in the rural regions and exurbs—accepts and lives out the concept of the “melting pot,” while the other half—in urban environments—embraces and lives with predominant multiculturalism, Lind said.

This city vs. country divide sets this era apart from earlier ones where region was more of a factor.

For most of American history, the concept of the melting pot has worked, but Lind said he is pessimistic for its future because of demography.

“The native fertility rate in Western societies is below replacement … we need to have replacement immigration of some kind in order to prevent the population from just collapsing,” Lind said.

However, the continually low birth rates in these societies will put pressure on them to increase immigration, he said, and so feed the constant political base for multiculturalism.

Mac Donald, also a contributor to City Journal, said people of “courage” need to confront the ideology of identity politics directly for the sake of the nation’s future.

She summed up what she said is the crux of of the debate and the oppression narrative:

The main driver is race—women are sort of a fast second place—but the main driver of all this is the lingering racial disparities, and we both need to close them and be honest about what’s driving them.

I would say family breakdown is the biggest driver and other behavioral disparities and culture [are also drivers]. Those need to be closed because if not, the oppression narrative is going to be with us to our enormous misfortune.

Sullivan said that while identity politics has existed in the past—notably in the 1990s—it’s “different now.”

People debated the concepts of identity politics in earlier eras, and often vehemently opposed them, but now identity politics has taken over “all teaching in the humanities” and has been fully embraced by an entire generation of “the elite,” the writer said.

Sullivan, an early supporter of same-sex marriage and President Barack Obama, said that it’s “staggering” how the ideas of identity politics have been universally accepted by the young elite, without question.

These ideas have spread beyond the college campus, Sullivan wrote earlier this year, and entered the mainstream of debate in America.

“It is staggering how people under the age of 30 buy all of this, have never even regarded it as questionable, that it’s become completely routine to believe these things,” Sullivan said.

Sullivan attributed this, in part, to parenting.

Parents tried so hard to create safe spaces for their children, he said, that the children were simply unable to handle disagreement or anything that made them feel unsafe.

What’s remarkable, he said, is that identity victimhood politics comes at a time when many of these groups are thriving more than ever before in history.

“We should talk about the successes that have occurred without this stuff,” Sullivan said. “In fact, I sometimes wonder whether this stuff is a function of having succeeded, because you’re terrified you’re going to lose the struggle you always lived with and you have nothing to do with your life.”