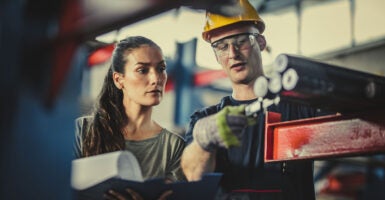 The Corporate Transparency Act would create a harmful reporting regime for small businesses while adding virtually nothing to achieve its stated purpose of protecting the U.S. from illicit finance. (Photo: skynesher/Getty Images)

Progressives and some Republicans are trying to sneak a bill into the National Defense Authorization Act that would impose a beneficial ownership reporting regime on small businesses.

It would create a large compliance burden on approximately 11 million businesses with 20 or fewer employees (the only non-exempt category) and would create as many as a million inadvertent felons.

Given the economic reverses that most small businesses have suffered this year, this is precisely the wrong time to impose a massive new federal compliance burden on only small firms.

Under the bill, small businesses would be subject to fines and imprisonment unless they file the proper reports with the Treasury Department’s Financial Crimes Enforcement Network. The rules governing the reporting are complex and full of ambiguities.

The proposed beneficial ownership reporting rules are easily and lawfully avoided by the sophisticated, so they would do virtually nothing to achieve their stated aim of protecting society from terrorism, drug dealers, tax evasion, or other forms of illicit finance. Those most able to abuse the financial system would be exempt.

Furthermore, the vast majority of the information that the proposed reporting regime would obtain is already provided to the IRS.

Allowing the IRS to share this information with the Financial Crimes Enforcement Network would better meet the needs of law enforcement by providing more comprehensive information and better enforcement than would the proposed reporting regime.

The Senate version of the National Defense Authorization Act does not include a beneficial ownership reporting regime.