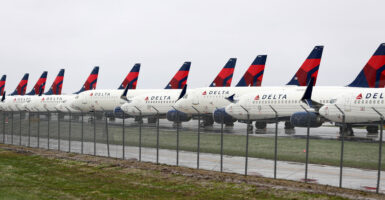 While some industries—airlines included—have been hurt more than others, Congress should not use taxpayer dollars to pick winners and losers. Pictured: Planes belonging to Delta Air Lines sit idle at Kansas City International Airport on April 3 in Kansas City, Missouri. (Photo: Jamie Squire/Getty Images)

With the long campaign season finally over, Congress is returning for several weeks of legislative sessions between now and Jan. 2. It’s rare for substantial legislation to pass during the so-called lame-duck period, but this year could be different due to the COVID-19 pandemic. And one proposal that legislators are considering in earnest is airline bailouts.

The federal government has spent trillions of dollars addressing the health and economic consequences of COVID-19. Many of the programs and provisions passed during the spring have expired, and leaders from both parties have stated that they intend to work on a new package.

If Congress does decide to pass economic relief legislation, it shouldn’t give special treatment to the airline industry. Rather, it should seek to make it easier for all industries to resume their provision of goods and services, and for all workers to find jobs.

The CARES Act, passed in March, was the largest relief package in America’s history. Among its provisions was $25 billion in loans and $25 billion in grants to airlines, which experienced a roughly 90% drop in passenger volume.

With these funds came many strings attached that caused the airlines to lose even more money. In addition to preventing (or at least minimizing) layoffs for their heavily unionized workforce through Sept. 30, the federal government’s move to require airlines to maintain excessive flight schedules resulted in empty flights and a huge waste of money.

Over the last several months there has been discussion in Congress about whether to pass another round of airline bailouts. Both House Democrats and Senate Republicans have introduced legislation to funnel billions more to the industry.

Congress has done more than enough already—both in the amount of money it has spent and in the increased risks from higher debt and added future tax burdens it has imposed.

While some industries—airlines included—have been hurt more than others, Congress should not use taxpayer dollars to pick winners and losers. After all, it’s not just airlines, but also hotels, laundromats, live music, professional sports, and many other industries that have also suffered considerably. But it’s not Congress’ job to hold them harmless.

Rather, legislators should focus on making it easier for all industries to adapt and recover, while helping keep doors open and create new opportunities for all individuals, businesses, and households.

Most experts think it will take years for airlines to fully recover. Even after the pandemic is under control, the increased use of teleconferencing will likely reduce the amount of business travel, which is a huge portion of airline revenue. But there could be other shifts—such as intermittent travel arising from an increase in remote work positions—that could partly offset other declines.

In any event, the airline industry—and all industries—will have to adapt to the post-COVID-19 economy.

Such adaptations are already underway, resulting in new technology and innovations that will have positive impacts far beyond this global pandemic.

The CommonPass mobile app, for example, could help open up more travel by providing a way to document travelers’ health across borders. And airlines’ trials of on-site rapid testing could increase travel by ensuring greater safety.

Adaptation isn’t all growth and innovation, though—it also involves streamlining operations and potentially relying on fewer workers. Lost jobs are painful in the short run, but usually lead to better outcomes in the long run.

That’s because no one benefits from keeping people in positions where they aren’t producing much value. Maintaining a full staff of flight attendants and baggage handlers simply doesn’t make sense when there are only one-third as many airline travelers.

Rather than subsidize workers and have them keep reporting to jobs where they produce little value, both individuals and society would be better off with workers shifting to jobs with higher demand, where they can produce more value and therefore merit higher wages.

Instead of sending another $25 billion gift to airlines, federal as well as state and local lawmakers should help make it easier for airlines—and all industries—to recover and adapt.

For starters, not imposing excessive travel restrictions and quarantine requirements that prevent individuals from being able to travel, and easing restrictions and red tape on innovations that help improve people’s lives and livelihoods.

Another option would be for the federal government to prepay for service expenses such as flights and hotel reservations that can reasonably be expected over the next few years. This would provide financial assistance during the pandemic without resorting to a pure handout.

There is also a lot that policymakers can do—without taxpayer cost—to help individuals who have lost work.