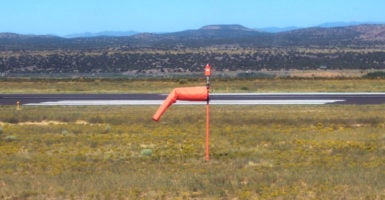 You’d think that if Congress made it a point to bail out an industry with tens of billions of taxpayer dollars, it wouldn’t sabotage it at the same time.

Yet this is exactly what is happening to airlines as a result of Washington’s politics-first fixation with preserving low-traffic airports.

The travel sector of the economy is struggling as a result of the coronavirus pandemic, and airlines in particular are facing catastrophic declines due to cancellations and lost business. The high overhead costs of plane maintenance and payrolls makes it difficult for airlines to absorb the blow.

Congress gave the airlines a bailout following the last event-driven downturn for the industry, the 9/11 terrorist attacks.

While there were better alternatives to handouts in the current situation, it came as no surprise that airlines received special treatment in the recently enacted CARES Act.

Specifically, the law contains $25 billion in loans and $25 billion in grants for passenger airlines. The money does not come free of charge, and the conditions are causing severe turbulence for the industry.

Congressional Democrats pushed for the grants, which, unlike loans, are not paid back, largely on behalf of airline employee unions. The law stipulates that airlines taking grants avoid layoffs and compensation reductions through Sept. 30.

There are good reasons to view the effectiveness of this provision with skepticism, as there are ways for airlines to game the system by cutting hours for part-time employees. These employees could in turn file for unemployment benefits due to benefit expansions under the CARES Act.

Another relevant aspect of the CARES Act is part of a long, bipartisan, and highly wasteful tradition: maintaining flights to dozens of little-used rural airports.

From a political standpoint, helping to keep an airport open with federal dollars is a way to curry favor with those who work at and frequent the airport, along with state and local elected officials.

This dates back to the highly successful airline deregulation of the late 1970s. Some members of Congress were concerned that deregulation would harm remote airports, and created the Essential Air Service program as a “temporary” subsidy.

This being Washington, the “temporary” program is still going strong.

The program received $56 million in the CARES Act, which is roughly one-sixth of its annual spending. Essential Air Service is one of the foremost examples of unnecessary and inappropriate federal spending, often subsidizing small flights to the tune of hundreds of dollars per passenger.

Yet this was not enough to satisfy legislators, who benefit politically from keeping obscure airports open.

Section 4005 of CARES dictates that airlines must maintain flight service as it stood in mid-March, and specifically qualifies this by pointing to “small and remote communities” and delivering medical supplies. The requirement extends all the way to March 2022.

The medical supply delivery mandate is unlikely to impose a substantial burden, since cargo air carriers perform this task as part of their normal business.

In contrast, the rural service mandate means that airlines must run unprofitable and sometimes empty flights just for the sake of appeasing the government. Small, niche airlines are especially harmed by the one-size-fits-all burden.

For example, Sun Country Airlines submitted a comment to the Department of Transportation to point out that airlines with seasonal changes in businesses will be forced to operate more flights than they would in a normal year, let alone during a severe downturn. Several other airlines also sent comments to note the harmful effects of this parochial airport protectionism.

Congress should stop attempting to pick winners and losers in the economy, and that includes airports.

The simple fact is that commercial airports exist to benefit passengers. If there weren’t many passengers using a given airport during the pre-pandemic economic boom, the airport doesn’t make sense anymore. Washington shouldn’t waste public and private money on airports that have been on the dole since the days of disco.

It makes even less sense to beggar the airline industry during a generational business downturn that is out of its control, for the sake of these tiny airports. The airports are already getting their own bailout in the form of the extra Essential Air Service money, so the service mandates for airlines are almost punitive.

The CARES Act was passed in a hurried fashion and contains many flaws that are already harming the economy. Congress should fix these flaws, including the service mandate for airlines, as soon as possible.