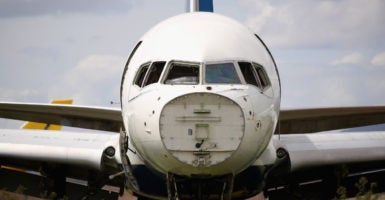 Decommissioned and suspended commercial aircraft are seen stored in Pinal Airpark March 19, 2020, in Marana, Arizona. U.S. airlines are slashing their domestic and foreign flights in response to the coronavirus pandemic and President Donald Trump's travel ban and published reports say that some of the unused planes will end up at the facility. (Photo: Christian Petersen/Getty Images)

While the coronavirus pandemic and its related effects have harmed all sectors of the economy, the transportation and hospitality industries have taken an especially hard hit.

The sharp decline in consumer spending on travel—especially for leisure and large events—has thousands of companies and millions of employees on edge.

It comes as no surprise that the aviation sector has reached out to Washington for assistance. Airlines are requesting $60 billion in loans and subsidies, and airports are seeking a smaller amount.

Some of this assistance, focused on loans, could be part of a forthcoming legislative package.

Before legislators approve bailouts, especially outright handouts, they should try a better approach; namely, paying for predictable goods and services in advance and allowing businesses to receive refunds for past income taxes based on current losses.

The federal government spends more than $10 billion annually on travel, including transportation and lodging expenses. While that amount will likely decline this year, we can reasonably expect that it will return to normal next year. That’s especially true for the largest category of federal travel spending, defense travel, primarily transporting troops to and from deployment.

Establishing a prepaid balance with airlines, hotels, and vehicle rental services that the federal government uses regularly would provide a helpful cash injection during the temporary economic dip. That would have the effect of being an interest-free loan for the businesses.

Although it would cause an increase in the current year federal deficit, that would be balanced by savings next year. If the virus lingers for months, rather than weeks, the advance purchase plan could be extended through 2022 to provide additional relief.

When a business loses money in a given year, it can apply that loss to income in future years and reduce its tax burden. Similar to the prepayment concept above, the IRS could allow a business to apply existing losses and estimated 2020 net operating losses to taxes paid in the past, rather than forcing the business to wait for future years.

The business would get a refund for past taxes it paid, based on the size of its current plus-projected losses, which would provide much-needed cash today in exchange for higher tax payments when it returns to profitability.

This approach would offer the largest benefit for businesses struggling with the biggest losses right now, and would thus be ideal for airlines and the rest of the travel and hospitality sector.

Both of these ideas would be preferable to the types of support that the aviation industry is seeking, much of which would amount to hidden handouts.

That would be the wrong approach.

Authorizing federal payments to businesses based on the economic damage caused by the coronavirus would set a dangerous precedent.

Unlike the situation following the 9/11 terrorist attacks—which slammed air travel, but did not cause fundamental damage to other industries—the effects of the coronavirus are widespread.

Simply put, the federal government can’t bail everyone out.

On that subject, it’s important for the public to keep an eye out for stealth bailouts.

With airlines, that includes ideas such as giving airlines money that normally goes into infrastructure funds. That would include the 7.5% federal airline ticket tax, which goes toward an airport trust fund, and the passenger facility charge, which is levied directly by airports for maintenance and expansion.

If Washington allows airlines to keep these taxes and fees, that would have precisely the same effect as cutting them a check, only it will be less transparent to taxpayers. That’s because the federal government would instead wind up bailing out the airport trust fund and would provide airports with any lost passenger facility charge revenue.

Another troubling aspect of the passenger facility charge idea is that it would mean further federal interference in the operation of local airports.

The federal government already subsidizes various aspects of the aviation industry to the tune of billions of dollars per year, including infrastructure and loans.

Additional support in the form of advance federal purchases and changes to corporate income taxes would help businesses without imposing long-term costs for taxpayers.

However, more expensive bailout plans should be approached with extreme caution, and certainly should not mark the start of an endless series of bailouts for other sectors of the economy