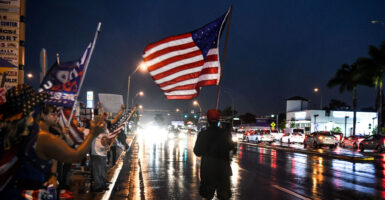 Twenty years ago, Florida became a global example of how not to run a democratic election. In 2020, it did its job well. Pictured: Floridians demonstrate in the streets on Nov. 5. (Photo: Chandan Khanna/AFP/Getty Images) 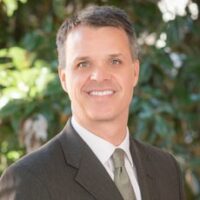 Robert McClure, Ph.D., is the president and CEO of The James Madison Institute, a nonpartisan, public policy research organization based in Florida.

Election Day 2020 was many things to many people—depending on your age, philosophy, and geography. It’s probably a Rorschach test for the country. It’s a reminder that our nation is large and complicated, with diverse perspectives crossing numerous cultural lines. For millions of us in Florida, however, Election Day was something else.

It was a day to finally shed a 20-year-old demon, and another example of how the Sunshine State can serve as a lighthouse to steer our nation forward.

Twenty years ago, a divided country was thrown into a nightmare scenario unprecedented at the time—a presidential election hanging on the results of a single state, with a margin so razor thin the state’s results, and thus the election, could not be called.

As the lawyers descended and legal challenges worked their way up both the state and federal court systems, Americans learned terms like automatic versus hand recounts, hanging and dimpled chads, and divining voter intent.

After more than a month of legal wrangling, protests, and anxiety, the United States Supreme Court issued its ruling in Bush v. Gore, and George W. Bush won Florida by 537 votes (out of more than 5.8 million votes cast).

Florida became, right or wrong, a global example of how not to run a democratic election. It’s shocking to realize that there are first-time voters now that weren’t even born then.

Florida’s voter rolls doubled over those two decades. In the 2020 election, more than 11 million voters cast a ballot. They did so over a period of about two weeks of early and “day of” voting, by mail and absentee, from Pensacola to Key West.

And then, at roughly 8:15 p.m. Eastern Standard Time, the vast majority of the vote totals were posted by the Florida secretary of state. By 10:30 p.m., most reasonable people understood what the networks were reluctant to publicly state: Donald Trump had won Florida’s 29 electoral votes by about 400,000 votes, a major victory in a state in which statewide elections have been razor thin.

Think about what we didn’t hear from Florida—no issues of people unable to vote or being turned away from polls, no questionable tactics from outside groups, no concerns about the vote tallying, no protests, no “divining voter intent.” Florida did its job, and did it well.

Much of this success is a credit to Florida’s Gov. Ron DeSantis, Secretary of State Laurel Lee, and the work of 67 supervisors of elections across the state, whose sole job is to ensure a smooth election. They put on a master class in conducting an election that should be the envy of the rest of the country. They are professionals, they were prepared, and they made Floridians proud.

Now, in this world, nothing is ever perfect. And it is important to remain vigilant as public servants like Peter Antonacci—the supervisor of elections in Broward County—clean up the mess left behind by his predecessor, Brenda Snipes.

Widely acknowledged as one of the worst election supervisors in the United States, she left her successor a voter registration list in terrible shape, filled with dead voters and voters who no longer reside in the county.

Nevertheless, the strides made in a short time are to be commended.

As we all sort through the rubble of the results, and the media/candidate/legal focus turns to Arizona, Michigan, Georgia, and Pennsylvania, I would like to proffer a suggestion that I never thought I would ever make (especially after the memory of 2000).

Take a look at us here, in the state people love to make fun of and see how it’s done.

Take a look at your outdated, archaic rules for voting and tabulating and reporting and throw them all in the proverbial trash.

Take a look at the Sunshine State—not in scorn, but in envy—and use us as the model for how to run a smooth election and report the results of more than 11 million votes in a reasonable time period that withstands scrutiny.

This Florida man is, for a change, proud of the how we shined bright. We’ve come a long way.