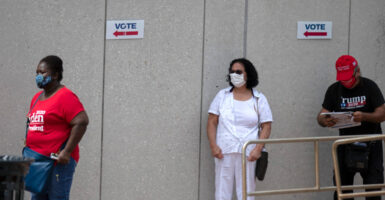 A judge's words are troubling because they cast into question how he will rule on future election-related issues involving Florida officials. Pictured: Voters wait in line, socially distanced, to cast early ballots Monday at the regional library in Westchester, Florida. (Photo: Joe Raedle/Getty Images)

Florida, like most other states, requires those who wish to vote in upcoming elections to register.

Florida’s deadline for registering to vote in the upcoming general election was 11:59 p.m. Oct. 5. To facilitate the process, Florida provides a voter registration website, RegisterToVoteFlorida.gov. Unfortunately, the registration website malfunctioned for several hours on that day, potentially preventing individuals from registering.

In response, Florida’s secretary of state issued a directive that she would accept online registrations completed by 7 p.m. the following day, and that local elections offices would accept applications postmarked or delivered in person by that day.

Common sense says that this extension more than made up for the technology failure.

Still, common sense is in short supply these days, and this wasn’t enough for several organizations that filed a lawsuit over the website malfunction.

They sought what they called emergency injunctive and declaratory relief, alleging that the secretary of state’s “malfunctioning online voter registration system and failure to adequately extend the voter registration deadline pose[d] an undue burden on the right to vote,” violating the Constitution’s First and 14th Amendments.

Begrudgingly, a federal judge for the Northern District of Florida, Mark E. Walker, an Obama appointee, denied these groups’ requests. But Walker took gratuitous and unfair potshots at Florida officials in the process.

“Unfortunately for these potential voters, this Court cannot remedy what the state broke under these circumstances,” Walker said, adding:

In so ruling, this Court notes that every man who has stepped foot on the Moon launched from the Kennedy Space Center in Florida. Yet, Florida has failed to figure out how to run an election properly—a task simpler than rocket science.

Of course, unintentional technology and website failures and problems are a common occurrence throughout this country in private industry, in government, and even in the courts.

This is particularly true as much of America has moved online in the midst of the COVID-19 pandemic.

No doubt, the Apollo space program was one of our nation’s greatest achievements, but Walker seems to have forgotten the numerous failures and tragedies that occurred on our way to the moon—from the terrible deaths of astronauts Gus Grissom, Roger Chaffee, and Ed White to the near disaster of Apollo 13.

Although the district court itself undoubtedly has never been responsible for running either a statewide election or putting a man on the moon, it is responsible for correctly applying and interpreting the law.

Walker’s language exhibits a certain hubris, but his words are also troubling because they cast into question how the judge will rule on future election-related issues involving Florida officials.

This isn’t to suggest that Walker is biased against those officials, although he was harshly critical. It appears, however, that the judge may not closely adhere to guidance from the Supreme Court, especially its decisions laying out guidance for applying the principle outlined in its 2006 Purcell decision.

That principle holds that federal courts should avoid unnecessarily interfering with and changing election procedures and administration close to Election Day.

It is true, as the Eleventh Circuit has aptly pointed out, that there has been a trend in recent Supreme Court decisions that suggests that district courts should allow ‘the states to run their own elections.’ … In plain words, this Court gives no weight to the recent trend of election related cases; instead it focus on the particular facts of this case in light of Purcell.

Despite the tough talk, Walker’s decision suggests that he did just that—he followed the rules set out by the Supreme Court and avoided changing Florida’s voter registration deadline despite the temptation to do so. And that’s how it should be.