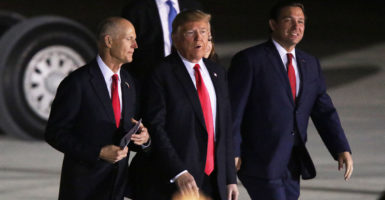 From left, Florida Gov. Rick Scott, the Republican candidate for Senate from Florida; President Donald Trump; and Republican candidate for Florida governor Ron DeSantis walk off Air Force One for a rally in Pensacola, Florida, on Nov. 3. Scott and DeSantis are leading in their races, but the close contests are likely headed for recounts. (Photo: Dan Anderson/ZUMA Wire/Newscom)

President Donald Trump is scrutinizing the Florida election-recount process, and he isn’t the only one—largely because of Broward County.

By Friday morning, both Nelson and Gillum were challenging the outcome.

Also still in question is the outcome of the race for the state agriculture commissioner, with the candidates separated by fewer than 500 votes as of Thursday night.

Automatic recounts are triggered under Florida law when the candidates are separated by less than 0.5 percent of the vote. The office of Florida Secretary of State Ken Detzner, a Republican, will review the returns on Saturday.

Broward and Palm Beach Counties have failed in their duty to follow Florida law, which requires that vote by mail and absentee ballots are accounted within 30 minutes of polls closing

Departing the White House on Friday morning en route to Paris, Trump said there “could be” a federal role for sorting out the electoral mess in Florida, when asked about it by a reporter.

He also referenced Brenda Snipes, the supervisor of elections for Broward County—though not by name. Snipes, a Democrat, was most recently re-elected in 2016.

“All of the sudden, they are finding votes out of nowhere, and Rick Scott who won—it was close, but he won by a comfortable margin,” the president said of the Republican hopeful’s vote edge. “Every couple of hours, it goes down a little bit.”

As The Daily Signal reported last year, Snipes admitted, in a lawsuit over the county having more registered voters than eligible voters, that noncitizens and felons might have voted.

In May of this year, a state judge ruled that Snipes violated state and federal law when she destroyed ballots from a Democratic congressional primary in August 2016, even though there was a pending lawsuit seeking access to the ballots.

Her office also posted results of an election 30 minutes before polls closed, which was a violation of the law.

Days before the election this year, the Miami Herald ran an article anticipating problems in Broward County, noting Snipes and her background.

“Bad things have gone on in Broward County, really bad things. She’s been to court. She’s had a lot of problems. She’s lost,” Trump said. “I say this: He [Scott] easily won. But every hour it seems to be going down. I think that people have to look at it very, very cautiously. … What’s happening in Florida is a disgrace.

Scott was also critical of Snipes.

The Broward Supervisor of Elections Brenda Snipes has a history of acting in bad faith. As you will recall, a judge ruled just this year that the office violated both state and federal laws by illegally destroying ballots in 2016.

For her part, Snipes told a South Florida ABC affiliate that her office was counting five or six pages for each person who voted by mail.

The Associated Press reported Snipes said she wasn’t certain how many ballots remain to be counted.

J. Christian Adams, a former election lawyer with the Justice Department and now president of the Public Interest Legal Foundation, argued against Snipes’ office in a two-week trial in 2017 in Florida.

“Brenda Snipes is one of the most incompetent election officials in the United States,” Adams told The Daily Signal. “She does a terrible job maintaining the voter rolls and enforcing the voter laws. She has been sued three times in the past two years. It’s astounding to me that she keeps her job.”

In 2014, her office was sued over a confusing ballot layout. In 2016, she was again sued regarding the destroyed ballots. Scott’s legal action marks the third lawsuit against her.

Interestingly, Snipes was first appointed to the post in 2002 after her predecessor, Miriam Oliphant, was removed for incompetence. She has since been elected and re-elected to several four-year terms to the county office.

Ballots were counted slowly every year except for 2008 and 2010 under her watch, according to the South Florida Sun-Sentinel.

The last time the eyes of the political world were on Florida was after the presidential election of 2000. That’s when Florida recounts and a Supreme Court case decided the presidential contest between then-Texas Gov. George W. Bush, a Republican, and then-Vice President Al Gore, a Democrat.

“I don’t even think there’s any similarities,” Adams said. “In 2000, the question was about the intent of the voter. In these cases, we’re not even there yet.”

During his briefing with reporters Friday, Trump also referenced Nelson’s lawyer, again though not by name, and the connection Elias had with the infamous so-called “Steele dossier,” the unverified opposition research document that suggested ties between Trump and Russians.

Elias works for the Perkins Coie law firm, which retained Fusion GPS for opposition research on Trump. That resulted in the document written by a former British spy, Christopher Steele, that became the basis for the federal investigation into alleged collusion between the Trump presidential campaign and Russian operatives to affect the outcome of the 2016 election.

“Then, you see the people, and they were involved in the fraud of the fake dossier, and I guess I hear they were somehow involved with the [Fusion GPS] people,” Trump said referencing Elias.

Now democrat lawyers are descending on #Florida. They have been very clear they aren’t here to make sure every vote is counted.

– They are here to change the results of election; &
– #Broward is where they plan to do it.#Sayfie

Senator, I think you have lost your mind. Delete your account. https://t.co/cR6v7ncrrm

UPDATE: The Florida Senate election margin has further narrowed–it is now a mere 15,068 votes or .18%. As the counties continue their work, I expect that margin will narrow further. And then the State will conduct an orderly recount. https://t.co/Yxuxw8wDlj

Rick Scott just attacked me as a lawyer from Washington DC as he announced a lawsuit literally in the name of the national Republican Party located in Washington, D.C.

Gillum, the Democratic candidate for governor, said he is just interested in seeing all votes counted. He previously conceded the race, but subsequently rescinded his concession.

DeSantis, the Republican candidate for governor, who has declared victory, has generally continued acting like the victor, the Associated Press reported.