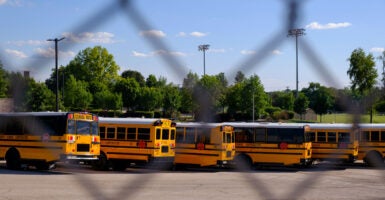 With children not attending school in person, many working parents have had to cut back on work hours or quit their jobs entirely. Pictured: School buses sit in a parking lot in Bloomington, Indiana. (Photo: Jeremy Hogan/SOPA Images/LightRocket/Getty Images)

The unemployment rate dropped more than expected in October, to 6.9%—from 7.9% in September—as 638,000 jobs were added or regained.

Moreover, the number of people reporting lost work (either reduced hours or none) because their employer closed or lost business due to the coronavirus pandemic plummeted by 4.3 million, to 15.1 million.

While the unemployment rate continues its downward trend nationally, some states are lagging far behind others, with state and local decisions on the reopening of society driving the labor market and the well-being of individuals, families, and businesses.

States that have given individuals, businesses, and schools the freedom to return to most activities with proper safety precautions in place are faring relatively well, while those that have imposed unnecessary restrictions have a lot more people out of work, children falling behind, households struggling to get by, and small businesses collapsing.

That ranking was based on 17 different factors, ranging from business and travel restrictions to court openings and business liability limits.

An incredibly important factor affecting the well-being of workers and families is the option of in-person schooling. After all, without children attending school, many working parents have had to cut back on work hours or quit their jobs entirely.

In October, 3.6 million people were prevented from looking for work because of the pandemic. Additional school openings in October likely contributed to this figure dropping from 4.5 million in September, but with many schools remaining entirely virtual, many either cannot work or can only work in a limited capacity.

While parents who are at home and not looking for work aren’t counted among the unemployed, school closures have spillover effects across societies. Places with more in-person education options have had stronger economic rebounds and lower unemployment rates.

When breaking it down to the district level, the trend appears to be the same. Among the 50 largest public school districts in the U.S., those that are fully open or have the option for in-person education averaged 7% unemployment in September, while districts with a hybrid of in-person and virtual learning averaged 8% unemployment, and districts without in-person options averaged 9.6% joblessness.

While business reopenings contributed to the record-setting economic growth in the third quarter, many households and areas of the country will continue to struggle as long as children remain shut out of their classrooms.

More than 50 million children attend public elementary and secondary schools in the U.S., and more than 70% of households with school-age children have all parents in the household working.

In addition to near-term and potentially lifelong consequences for children not attending schools, America cannot fully recover until parents have the option for their children to go back to school.

Substantial evidence shows that schools have not been COVID-19 “superspreaders,” and it’s actually quite safe for children to return to schools with proper safety measures in place.

State and local policymakers should reopen schools with in-person instruction options. When they don’t, states should provide families with the state per-pupil funding that would have gone to students—in the form of education savings accounts—to use for private school tuition or a learning option of choice.