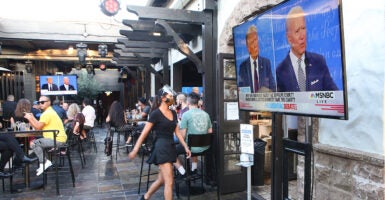 A republic is not just a nation of laws. It also relies on its good-faith watchdogs, such as honest pollsters, the media, and bipartisan institutions.

We still didn’t know the final result of Tuesday’s presidential election as of Wednesday night. But there are lots of reasons to worry that something in America has gone terribly wrong.

Many of the mainstream pre-election polls predicted that Donald Trump would lose in a landslide. He did not—to the shock of a host of propagandists.

A CNN poll had Trump down 12 percentage points nationally entering the final week before the election. An ABC News/Washington Post poll in late October claimed Joe Biden was leading in Wisconsin by 17 points. That state’s voting ended up nearly even.

Pollsters were widely wrong in 2016. Yet they learned nothing about their flawed methodologies. So how do they remain credible after 2020, when most were wildly off again?

A cynic might answer that polling no longer aims to offer scientific assessments of voter intentions.

Pollsters, the vast majority of them progressives, have become political operatives. They see their task as ginning up political support for their candidates and demoralizing the opposition. Some are profiteering as internal pollsters for political campaigns and special interests.

Never again will Americans believe these “mainstream” pollsters’ predictions because they have been exposed as rank propagandists.

That bleak assessment won’t make much difference to pollsters. They privately understand what their real mission has become and why they are no longer scientific prognosticators.

Big liberal donors sent cash infusions totaling some $500 million into Senate races across the country to destroy Republican incumbents and take back the Senate. In the end, they may have failed to change many of the outcomes.

But did they really fail?

Democrats dispelled the fossilized notion that “dark money” is dangerous to politics. They are now the party of the ultra-rich, at war with the middle classes, whom they write off as clingers, deplorables, dregs, and chumps.

In that context, the staggering amounts of money were a valuable marker. The liberal mega-rich are warning politicians that from now on, they will try to bury populist conservatives with so much oppositional cash that they would be wise to keep a low profile.

Winning is not the only aim of lavish liberal campaign funding. Deterring future opponents by warning them to be moderate or go bankrupt is another motivation.

Twitter co-founder and CEO Jack Dorsey seemed unapologetic that his company was systematically censoring and de-platforming conservative users. In a recent hearing he talked to members of the Senate as if he were a 19th-century railroad baron.

Google has been accused of massaging its search results to favor progressive agendas. During the final weeks of the campaign, social media platforms shut down accounts and censored ads and messages, providing an enormously valuable gift to Biden.

Silicon Valley, like the 19th-century oil, rail, and sugar trusts, sees no reason to hide its partisanship and clout.

The media coverage of the election was unsavory. Journalists confirmed the findings of Harvard University’s Shorenstein Center, which in an assessment of news coverage of Trump’s first 100 days in office found that 80% of the coverage was negative.

As in the fashion of the Russian collusion hoax, the media for weeks on end revved up their engines for a seemingly certain Biden landslide victory. They rarely cross-examined Biden on the issues. And they certainly stayed clear of the Biden family influence-peddling scandal.

What do all these power players—big polling, big money, big tech, and big media—have in common other than their partisanship and their powerful reach?

One, they stereotypically represent a virtue-signaling coastal elite that feels its own moral superiority allows it to destroy its own professional standards.

Two, they worry little about popular pushback because they assume that their money, loaded surveys, and internet and media cartels create, rather than reflect, public opinion.

Three, while these elite cadres have enormous resources, they still are relatively unpopular. Despite being outspent 2-to-1, pronounced doomed by pollsters, often censored on social media, and demonized in print and on television, Trump was neck and neck with Biden—a fact that a few days ago was deemed impossible.

If Biden wins, we should assume that in late January 2021 these same forces will regroup to frame a new post-election narrative.

Expect our Big Brothers to instruct Americans that the COVID-19 pandemic is mutating into little more than a bad flu.

The “Biden vaccine” and miraculous “Biden recovery” will have ended the need for Trump-era lockdowns.

And the rioting, looting, and arson?

They will all have miraculously disappeared because the disuniter and inciter Donald Trump is now gone.