Islamist Terror Attack in Nice an Assault on Free World 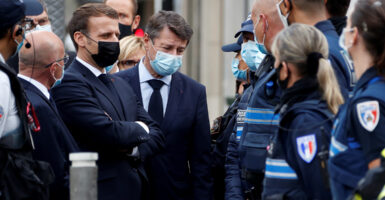 French President Emmanuel Macron, with black mask, and Nice Mayor Christian Estrosi, next to him, speak with police at the scene of a knife attack Thursday at the Notre-Dame Basilica in Nice. Estrosi told reporters that the assailant, shot by police, "kept repeating 'Allahu Akbar' ['God is greater'] even while under medication." (Photo: Eric Gaillard/Pool/AFP /Getty Images)

The barbaric terrorist attack Thursday morning in a church in the French city of Nice is a reminder that the free world is engaged in a long war against the forces of Islamist extremism and terror.

A man with a knife fatally stabbed three French civilians at the Notre-Dame Basilica in the center of Nice on the French Riviera.

One woman’s throat was slit, police told CNN. Earlier reports said she had been beheaded.

CNN reported that a police source said a man died after being stabbed repeatedly. The third victim, a woman, died in a nearby café after being wounded in the church, CNN reported.

Police shot the unidentified attacker, who they said was alive and in custody.

Nice Mayor Christian Estrosi said the assailant repeated the words “Allahu Akbar” (Arabic for “God is greater”) while being treated at the scene.

“I am on the scene with the police who arrested the attacker. Everything points to a terrorist attack,” Estrosi said on Twitter.

Nice was also the site of one of France’s deadliest terror attacks in 2016, when 84 people were murdered and more than 450 injured by an Islamist terrorist who drove a 20-ton truck through a crowd that had turned out for Bastille Day celebrations.

This is the latest in a series of recent terror attacks carried out by Islamists on French soil, including the beheading of a French school teacher, Samuel Paty, 47, just outside Paris. Paty’s killer, identified as Abdoullakh Abouyezidovitch, 18, was a refugee from Russia of Chechen origin.

In the wake of Paty’s brutal murder, French President Emmanuel Macron was right to stand firmly in the defense of free speech in France, and to send the message that the French people will not be intimidated by those who seek to destroy the freedoms that are enshrined in French law.

The French government already has launched a major crackdown on Islamist groups across the country, with a large number of arrests in recent weeks.

Government leaders must have a policy of zero tolerance for Islamist extremists, whose goal is the very destruction of the Western societies that have harbored them, in many cases for decades.

The United States stands with its French allies in confronting an evil ideology that seeks to strike at the very heart of Europe.

The Islamic State’s caliphate in Syria and Iraq largely has been destroyed as a result of U.S.-led military action. However, Islamist terror cells linked to both ISIS and al-Qaeda remain a deadly threat on European soil, as are individuals inspired by Islamist ideology.

The new terror attack in Nice will reinforce calls in France for tighter immigration controls and an urgent review of France’s asylum, refugee, and migrant policies.

The national origin and immigration status of Thursday’s killer was not immediately known, but French law enforcement authorities are acutely aware that both ISIS and al-Qaeda have a long track record of using refugees and asylum-seekers for terror attacks in Europe. Stricter border controls and vetting procedures are vital to keep Europe safe in the decades ahead.

As former French President Nicolas Sarkozy declared after the attack, “It is for everyone to fight against barbarity and for civilization.” France and other key U.S. allies in Europe, including Great Britain and Germany, stand on the front line of the war against Islamist terror.

Terror attacks on European soil undermine our allies and directly threaten the United States as well. Washington must continue to work closely with European capitals and intelligence agencies to defeat a global Islamist menace that seeks to threaten the entire free world.