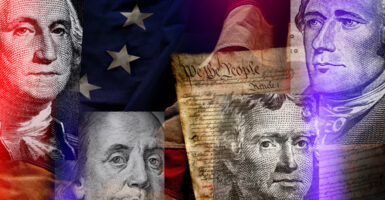 The Founding Fathers did not create the Electoral College for the purpose of bolstering the power of slave states, nor did it have the effect of doing so. (Photo: Tetra Images/Getty Images)

Sean Parnell is senior legislative director for Save Our States, an organization focused on defending the Electoral College.

The presidential election in 2016 reminded Americans of the role played by the Electoral College in electing our president.

Proponents of abolishing or nullifying the Electoral College and replacing it with a direct-election scheme are trying to delegitimize the traditional process by claiming it is a remnant of America’s racist past, created as part of the Founding Fathers’ effort to protect slavery.

The claim is completely false. The Founders did not create the Electoral College for the purpose of bolstering the power of slave states, nor did it have the effect of doing so.

The records of the Constitutional Convention plainly show that the Founders designed the Electoral College to keep the president independent of Congress, which would have selected the president under both the “Virginia Plan” and the rival “New Jersey Plan.”

Direct election of the president wasn’t seriously considered for several reasons, and it lost the few times delegates voted on the idea.

Using electors to select the president was proposed several times during the convention by anti-slavery delegates such as Alexander Hamilton, Gouverneur Morris, and William Paterson. Opposition came largely from Southern delegates.

When the convention passed an early version of the Electoral College in mid-July of 1787, only three states voted against it—Georgia, North Carolina, and South Carolina.

In the end, the Electoral College won out over congressional appointment with only North Carolina and South Carolina voting against it.

Some have argued that even if the Electoral College was not intended to strengthen the power of slave states, it nevertheless had that effect and helped to elect pro-slavery presidents because the three-fifths clause gave the slave states more representatives (and thus more electors).

History doesn’t support this claim either. With one possible exception, the additional electors provided under the three-fifths clause didn’t have a decisive role in any presidential election. The candidates who won the Electoral College in every election would have won without those electors.

The possible exception is the 1800 election for president, when Thomas Jefferson defeated incumbent John Adams. But it is impossible to know how the result might have differed without the three-fifths clause, because both Adams and Jefferson received enough electoral votes from slave states to affect the election. There’s no way to know who would have prevailed without those electors.

What is known is that in 1824, the Electoral College  prevented victory for Andrew Jackson, a staunch defender of slavery. Jackson received the most popular and electoral votes, but did not receive a majority of either.

The election was sent to the House of Representatives, which selected the anti-slavery candidate John Quincy Adams over Jackson.

Hamilton said of the Electoral College that if it was “not perfect, it is at least excellent.”

Those who wish to abolish or nullify the Electoral College might want to start looking for any of its real imperfections to press their case, rather than ignoring history and trying to falsely tie it to the vile institution of slavery.