Too Early to Judge the Fate of Pentagon Reform Efforts 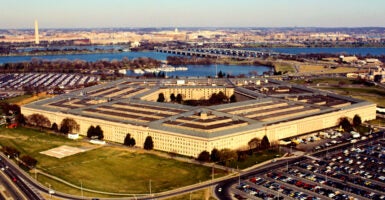 Congress’ decision to terminate the Pentagon position of chief management officer would be premature, given the reform's short existence. (Photo: Glowimages/Getty Images)

Adrian Hyman-Martin is a member of the Young Leaders Program at The Heritage Foundation.

If you hired a trainer to lose 50 pounds, would you fire him after two weeks if you’d lost only 5?

Now, imagine being asked to reform an agency of over 2 million employees that operates on a $700 billion budget. Could you do it in two years?

Congress seems to thinks so.

The need for defense management reform is ever-present and a stated priority of the National Defense Strategy. It is a process that consistently bumps up against opposition from inside the Pentagon and from the halls of Congress.

Multiple books have been written about the politics of reforming the Department of Defense. A common line is that such an effort cannot be achieved without consistent and effective leadership from the top, which suggests the need for a chief management officer or a similarly tasked position.

On Feb. 1, 2018, Congress implemented a 12-year-old recommendation to establish the position of chief management officer, or CMO, in the Pentagon. Now, less than three  years later, both the House and Senate essentially have deemed the CMO’s efforts a failure and  put provisions for  termination of the position in the annual defense authorization bill.

The report from the Defense Business Board that was used as the basis for terminating the CMO job  found “a critical need for a top-level official” to drive the business transformation effort within the Defense Department with the support of, and in partnership with, the secretary of defense and his deputy.

This conclusion sounds eerily similar to the Government Accountability Office’s recommendation for a CMO position 12 years prior, which said the Defense Department “needs a full-time chief management officer position, created through legislation, with responsibility and authority for DOD’s overall business transformation efforts.”

Given the short time the CMO position has been in existence, coupled with the relatively brief tenure of the incumbent, Congress’ decision to terminate the position seems premature, as suggested in a letter signed by lawmakers from both chambers and both sides of the aisle.

The letter, which includes the signatures of an unlikely pair–Sens. Ted Cruz, R-Texas, and Elizabeth Warren, D-Mass.–urges leaders of the two armed services committees to reconsider terminating the CMO. The lawmakers recommend giving the position more time and resources to prove its value and to promote meaningful reform.

Similarly, a recent Heritage Foundation paper supported the notion that the CMO position should be given more time to mature.

The lawmakers note that an independent assessment by the Government Accountability Office recommended the officer be given a tenure of five to seven years. The GAO deemed that period as necessary to provide the chief management officer with enough time to understand the byzantine inner workings of the Pentagon.

Providing such time also would allow the CMO to witness enough budget cycles to enact actual changes. It is unrealistic to assume that even the most qualified and driven individual could accomplish successful business management reforms in an agency the size of a country in only one or two budget cycles.

You wouldn’t fire that personal trainer after two weeks and 5 pounds. And Congress should give the Pentagon’s new reformer time to do the job.