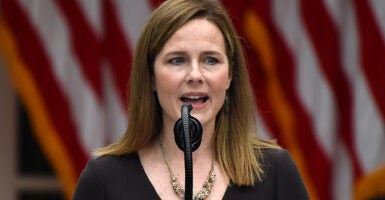 Fifty-one percent of voters say the Senate should confirm Supreme Court nominee Amy Coney Barrett. Pictured: Barrett speaks as she is nominated to the Supreme Court by President Donald Trump in the Rose Garden of the White House in Washington, D.C., Sept. 26, 2020. (Photo: Olivier Douliery/AFP/Getty Images)

A Morning Consult poll released Wednesday found that 51% of voters said the Senate should confirm Barrett, numbers which have risen 3 percentage points from last week. The poll surveyed 1,994 voters between Oct. 16 and Oct. 18  with a 2-point margin of error.

Morning Consult found that Barrett has more support from voters than Trump Supreme Court nominees Neil Gorsuch and Brett Kavanaugh had at any time during their confirmation processes.

WOW support for Barrett confirmation continues to rise after her hearings— including among Democrats and independents.

Democratic support for Barrett is also up 18 percentage points from the day that Trump nominated Barrett.

Over a third of voters polled say they have heard “a lot” about Barrett’s confirmation hearings—numbers that are higher than the 27% of voters who said they heard, saw, or read about 2020 presidential candidate Joe Biden and Trump’s televised town halls.