How School Choice Is About Marriage and Family, Not Just ‘the 3 Rs’ 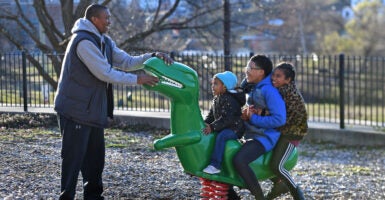 A new study sheds light on character development, exploring how the kinds of schools children attend are linked to their later life outcomes, in this case, family life. Pictured: DaSean Smith plays with his children (from left) Damirah, 3; DaSean Jr., 12; and Kaia, 11, at a playground in Washington, D.C., March 7. They were awaiting results of the competitive D.C. school lottery to determine which schools the children will attend. (Photo: Michael S. Williamson/The Washington Post/Getty Images)

W. Bradford Wilcox is director of the National Marriage Project at the University of Virginia.

Nearly two decades ago, President George W. Bush signed into law the No Child Left Behind Act, ushering in a period of education “reform” laser-focused on reading and math achievement.

That effort shined a bright light on academic achievement gaps, disaggregating student outcomes by race and income, and providing reams of data detailing all the ways our schools needed to improve when it came to the “3 Rs” (“reading, ’riting, and ’rithmetic”).

Although the spotlight on math and reading outcomes was bright, it shifted attention away from other areas, dimming the focus schools have on shaping student character and their role in forming students to live good lives as adult men and women.

A new study from Albert Cheng, Wendy Wang, Patrick Wolf, and W. Bradford Wilcox—“The Protestant Family Ethic: What Do Protestant, Catholic, Private, and Public Schooling Have to Do with Marriage, Divorce, and Non-marital Childbearing?”—turns the light back onto character development, exploring how the kinds of schools children attend are linked to their later life outcomes, in this case, family life.

It considers whether Catholic, Protestant, and secular private schools are more successful than public schools in putting children on a path toward strong and stable families later in life.

The study finds that students who attended private schools are more likely to be in a stable marriage, based on data from the Bureau of Labor Statistics and from the nationally representative Understanding America Study.

The private school advantage in getting and staying married largely held, especially for those who had attended Protestant schools, even after controlling for factors such as race, socioeconomic status, family background, and the education level of the children’s parents.

One of the more notable findings in the study was that children who grew up financially disadvantaged seemed to especially benefit from attending a private Catholic or Protestant school when it came to forging strong families later in life.

As adults, these men and women were more likely to be in intact marriages than their disadvantaged peers who had attended public schools.

Strikingly, as adults, 72% of students who had grown up in a financially disadvantaged household and attended a Protestant private school were in an intact marriage, compared with just 41% of similar adults who had attended a public school.

What accounts for this private school boost?

Principles and peers, the study suggests. Different schools cultivate different kinds of principles, with their own “distinctive ideals, beliefs, obligations, prohibitions, and commitments—many implicit and some explicit,” as James Hunter and Ryan Olson of the Institute for Advanced Studies in Culture have noted.

These new findings put teeth behind what we hear from surveys and from conversations with families: They care deeply—first and foremost, in fact—about the culture of their child’s school and about its capacity to form future adults of strong moral character.

Parents care deeply about their children becoming successful, happy adults in strong, loving families. And these are outcomes that aren’t captured through test scores, as the authors point out.

That’s something University of Arkansas professor Jay Greene has long noted. The problem with using test scores to decide which schools are good or bad is that test scores are poor proxies for later life outcomes.

The great contribution of “The Protestant Family Ethic” study, although it is descriptive in nature, is to identify which schools seem to be more likely to put students on a path toward a strong and stable family life down the road.

We have strong examples of schools doing character formation well.

He talks about how developing virtuous students prepares them for marriage in a lot of ways, and that treating students with dignity and respect in the classroom teaches them how to navigate conflict in a sensible way, preparing them for strong relationships later on.

Yet, as the study’s authors note, “When it comes to family life, many public schools just avoid talking about loaded matters touching on marriage, divorce, and non-marital childbearing.”

At the same time, in a nationally representative survey conducted recently by Braun Research for The Heritage Foundation, a full 72% of parents said they would like their child’s school to teach the Success Sequence, the concept that individuals can avoid poverty by graduating high school, getting a job or going to college, getting married, and then having children.

While we cannot draw causal connections from this report, the findings suggest that private schools, especially Protestant ones that regularly underline their commitment to marriage, foster strong and stable families. And that’s worth the price of admission for parents across the country.