How School Choice Could Improve Life for Teachers 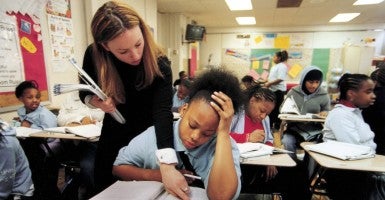 Schools of choice, be they private or charter, typically have more flexibility with personnel decisions and teacher pay, meaning great teachers can be rewarded for the important value they provide. (Photo: Michael Bryant/KRT/Newscom)

During National School Choice Week, advocates are demonstrating how students thrive when they have more education options.

While it’s often easy to see the success school choice programs have on students, what’s often missing from this conversation is the acknowledgment that teachers are also empowered by school choice.

Schools of choice, be they private or charter, typically have more flexibility with personnel decisions and teacher pay, meaning great teachers can be rewarded for the important value they provide. Unlike traditional district-run school systems, which pay teachers based on the time in the classroom instead of the value they add to student learning, schools of choice often have more flexibility to reward great teachers through initiatives such as performance pay.

Although that’s important, it’s the promise that education choice holds to reform education financing in more fundamental ways that could really be a boon to teachers.

Take the education savings account approach to choice. Education savings accounts, which are now in place in five states and under consideration in several more, empower families to direct the funding that would have been spent on their children in the public system to multiple education services, products, and providers. That includes private school tuition, but it also includes options like education therapies and private tutors.

Imagine what that could mean for teachers. It could mean supplementing their exiting teaching income through tutoring, with parents paying teachers directly after each lesson. Or it could mean teaching a course statewide online, with a teacher eligible to earn a salary that reflects how many students want to take her course—and pay her with their education savings account funds—as sign-up.

Although this hasn’t come to full fruition yet, it’s not outside the realm of possibility. And think of the talent and energy such a system of educator remuneration could foster.

South Korea’s decentralized education system demonstrates the amazing power of market-driven education. Currently, the demand for private tutors (rather than traditional schooling) is booming in South Korea, with one particular tutor earning $4 million per year—as much as an NBA star.

Although he is an exception, Forbes notes that rewarding teachers much more handsomely could be possible in the U.S., but that “strict government regulation and omnipresent state involvement in the education marketplace—combined with powerful unions preventing any one teacher from garnering a far bigger slice of the profit pie, let alone profitably branching out on his or her own—has insured that wage increases remain relatively constant and predictable.”

Reforms to public education financing, such as education savings accounts, allow parents to customize their child’s education and choose which teachers work best for them. This private negotiation for an exchange of services allow for good teachers to be paid for good work. As seen in South Korea, the sky is the limit for teacher pay in a market system.

Even though schools of choice occupy a very limited percentage of the market share (about 350,000 students out of 50 million nationwide have access to private school choice programs), teacher support for school choice remains positive. According to a 2015 Education Next Poll, a plurality of teachers support public charter schools, and 43 percent support tax credit scholarship programs.

The concept of choice in education expands beyond parents and families to teachers who wish to work in an environment that fits their own personal philosophies, skill sets, and goals. School choice could hold the key to transforming the teaching profession into a competitive and flexible field of educators who are rewarded for their unique skills and abilities.