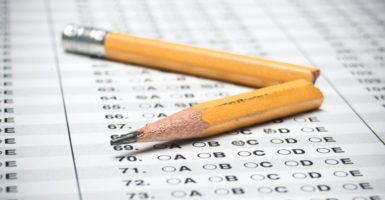 The College Board’s recent announcement that it will no longer score students based only on their ability to correctly answer questions on the SAT exam is about as welcome as a pop quiz.

Students will now also be assigned “adversity scores” of one to 100 using 15 different metrics regarding their background. The more disadvantaged a student is judged, the more points will be added to his or her adversity score.

What seems like a poor attempt at satire is, unfortunately, all too real. Breaking down human experiences and backgrounds, throwing them into an Excel spreadsheet, and assigning students a number to determine how privileged or disadvantaged they are sounds like something straight out of a “Saturday Night Live” sketch.

Students won’t know what their score is, but colleges will. Good luck to all of the talented high schoolers working hard to get into college, but who won’t know how the College Board ranked them—or have any recourse to challenge its decision.

Ultimately, this will render the SAT effectively meaningless. The public will have no idea if someone’s score and subsequent college admission is based on merit or if it’s the result of a student’s high adversity score bumping his or her application up the stack.

Furthermore, “adversity scoring” on the SAT will strip colleges and universities of their remaining credibility. The dean of admissions at Yale University, for example, stated that the adversity score is “literally affecting every application we look at,” according to The Wall Street Journal.

Colleges and universities are certainly always eager to obtain as much information as possible about their applicants and will likely follow Yale’s example.

American universities have hailed themselves as meritocracies. However, recent events call this claim into question.

We learned from the recent college admissions scandal that some schools are easily open to bribes or even fraud in their admissions process.

Asian Americans are currently suing Harvard University for discriminatory admissions policies. The Heritage Foundation’s Mike Gonzalez has noted that Harvard’s own reports reveal that “Only considering academics in the admissions process would raise the proportion of the Asian-American students admitted to Harvard from 18.7% to 43.4%.”

The College Board’s attempt to rank students based on adversity is simply the next step down the slippery slope of identity politics.

It’s disappointing to see universities turn their back on the American dream, which tells students that if you work hard and play by the rules you can have success in our country.

For students who do face adversity, the best thing we can do to level the playing field is to fix our broken public school system. Students who lack rigorous school choice options in their state must attend their assigned district public school, no matter the quality.

Restricting schooling options for families reinforces the cycle of poverty for students from poor neighborhoods, and undoubtedly affects a student’s preparedness for college.

Wealthy parents have been exercising choice for their children for decades, and it is time for state lawmakers to afford that right to all families.

Unfortunately, the College Board’s plan to assign adversity scores to students is simply another way that schools are tying the fate of America’s children to their ZIP code.

Instead of ranking students or placing them into groups, the College Board and universities should move past identity politics and treat students as individuals.