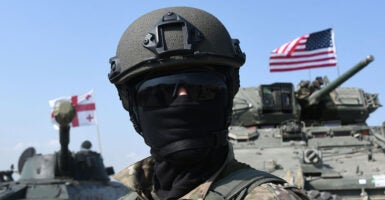 The policies of the Trump administration have significantly enhanced NATO’s capabilities. At the same time, U.S. bilateral relations with the U.K., Poland, and Italy remain healthy.

Even though the president and his French and German counterparts clearly do not see eye to eye on many issues, the lack of warm relations at the top has not affected meaningful and practicable cooperation.

The administration has effectively maintained key bilateral relations in Europe. In mid-2017, the president traveled to Poland, a front-line state and former Warsaw Pact country, and delivered a powerful speech committing the U.S. to NATO’s security guarantee.

The White House has strongly supported the idea of a U.S.-U.K. free trade agreement once London formally leaves the E.U. The administration has also generally supported the Brexit process at a time when other world leaders scorn the U.K.

As a collective security alliance, NATO is only as strong as its individual member states. Only a handful of NATO members can say that they are living up to their spending commitments. An increasingly acute threat perception and consistent calls from the administration for higher defense spending in Europe have led to real increases: an additional $41 billion in defense investment by NATO members from 2016 to 2018.

The current administration has overseen the enlargement of NATO with membership for Montenegro, which joined on June 5, 2017. In addition, the U.S. Senate approved North Macedonia’s proposed accession on Oct. 22, 2019, and NATO Secretary General Jens Stoltenberg said on Oct. 4 that “NATO’s door remains open.”

Even after criticizing Europeans for not spending enough on defense while the U.S. was spending too much, U.S. spending on European defense has doubled compared with President Barack Obama’s last year in office.

The Trump administration has built its relationships in the Middle East on pragmatism, shared security concerns, and economic interests, including large sales of U.S. arms to countries in the region that are seeking to defend themselves.

After the fallout in U.S. bilateral relations in the region resulting from the Obama administration’s ill-fated Iran deal, the Trump administration has made efforts to improve relations with Israel and the Gulf states.

Perhaps most important, the administration has shown that it will put its allies and its partners first before trying to appease adversaries such as Iran. This is completely different from the Obama administration’s approach. President Donald Trump’s first overseas trip was to Saudi Arabia and Israel.

The administration has dealt squarely and forthrightly with the adversarial regime in Iran. The United States withdrew from the nuclear agreement. With the support of Congress, the administration ratcheted up sanctions against the Iranian regime, added sanctions on Iranian proxy groups such as Hezbollah and Iraqi militias, and designated Iran’s Islamic Revolutionary Guard Corps as a foreign terrorist organization.

The administration’s hard-line approach to sanctions has reduced Iran’s oil revenues, diminished its ability to finance terrorism and political subversion, and elevated the risk that it will be overthrown by Iranians who are fed up with its repression, corruption, and costly foreign interventions.

Without question, the key focus of U.S. Indo-Pacific strategy is China. The traditional U.S. approach was, where possible, to look for areas in which we could accommodate and cooperate with Beijing and avoid confrontation. The Trump administration flipped that approach on its head.

The United States now consciously seeks to compete actively with China across the military, security, diplomatic, and economic spectrum.

By challenging China in these ways, the administration aims to force Beijing to recognize America’s interests and thus achieve a more stable relationship between the two powers.

Last year, Seoul was willing to accept an incremental increase but refused to accept such a high U.S. demand. Washington eventually acceded to a smaller increase but insisted on revisiting the agreement annually instead of every five years and has since renewed its demand. In 2020, similar cost-sharing negotiations will begin with Japan.

The administration restarted the Quadrilateral Security Dialogue. The Quad is an informal strategic dialogue among the United States, Japan, Australia, and India.

Military ties between the U.S. and India have improved significantly over the past decade as the two sides have moved toward establishment of a strategic partnership based on their mutual concern about rising Chinese military and economic influence and converging interests in countering regional terrorism.

The administration reaffirmed the importance of the U.S.-India relationship and has taken several steps to advance defense cooperation between the two countries. In 2018, the administration granted India Strategic Trade Authorization-1, which eases export control regulations on arms sales to India, among other things.