‘Medicare for All’ Not the Cure, Says Doctor and Army Ranger Elected to House 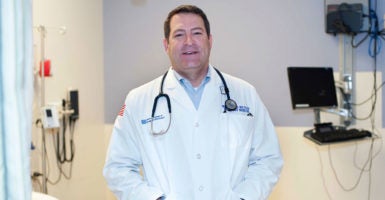 The free market is the cure to the nation’s health care crisis, not what liberals call Medicare for All, argues a physician, combat veteran, and businessman who just became a congressman from Tennessee.

“It’s too expensive,” Rep. Mark Green, elected in November to represent Tennessee’s 7th Congressional District, said of Medicare for All in an interview with The Daily Signal.

“If you look at the health care systems that are sort of universal-type care, like the VA, and you can look at some of the systems outside the country in Canada and places like that …  they wind up having to ration care somehow,” Green said.

“The cost estimates are $32.6 trillion,” he said of Democrats’ Medicare for All proposal. “We simply don’t have that money. And then if you look at quality, it just never works in those kinds of systems.”

Green, 54, who served in both the Army and the Army Reserves, made two trips to Iraq and one to Afghanistan.

An emergency room physician, he was a member of the Tennessee state Senate from 2013 until his election to the U.S. House of Representatives last year. His seat was vacated by Republican Marsha Blackburn when she ran successfully for the U.S. Senate.

“The most important thing is that we reinsert a free market into health care,” the freshman congressman said, adding:

People often make the argument, ‘Well, it’s health care. You can’t have a free market.’ Well, Lasik eye surgery, it seems to work pretty well. There’s no third-party payer paying for Lasik eye surgery. It’s a pure market-driven thing. And the price over the past several years has significantly decreased while technology has gone through the roof.

Green would know, as he is no stranger to the medical field.

He not only is a physician but the founder of two free medical clinics for the poor in Tennessee, one in a Baptist church in Memphis and the other at Manna Cafe Ministries in Clarksville.

The original thought, Green said, was to open a clinic as an overseas operation where an emergency room physician would work in one location for 11 months and then move on to another location overseas.

“We never really found the right clinic to do that with,” Green said, explaining:

So we just decided, ‘Well, heck, we’ll start one right here in our hometown.’ And we did that at a place called Manna Cafe in Clarksville, Tennessee. And then that was very successful. We probably gave away anywhere between $70,000 and $100,000 worth of free care a year at that clinic.

Green also started Align MD, an emergency department staffing and management company that staffed ERs in 52 hospitals across 11 states and brought in over $200 million in revenue each year, according to his official bio.

Referring to Align MD, Green said he “wanted to make sure that the people that I hired into my company were heart people, people who wanted to serve.”

He sold Align MD, which became American Physician Partners, according to his office.

Green said his decision to become a doctor was personal, and he made it after his father nearly died.

“I was actually in command of an infantry company in the 82nd Airborne Division as an infantry officer, and really thought that’s all I was ever going to do,” Green said of his March 1991 assignment to Fort Bragg, North Carolina.

Green said the doctor who saved his father’s life happened to have been an Army doctor, and that got him thinking about his own calling.

“As I got to know him and hear his story, I was like, ‘Oh my gosh, maybe I could do this too.’ And so I asked the Army, and they said, ‘If you get accepted [into medical school], we’ll pay your way.’”

Green said he started going to night classes and volunteered for the Army’s Recruiting Command so he could attend class at night.

“You don’t deploy when you’re in Recruiting Command,” Green said. “I remember working all day recruiting for the Army, and then going to school until 10 or 11 o’clock every night.”

Green graduated in 1999 from Boonshoft School of Medicine at Wright State University in Dayton, Ohio, did his residency in emergency medicine at Fort Hood, Texas, and was subsequently chosen to serve as a flight surgeon for the 160th Special Operations Aviation Regiment. Also called the Night Stalkers, the Army regiment provides helicopter support for both general purpose and special operations forces.

Green’s becoming a doctor is what landed him in special operations.

“Here I am a newly minted ER doc, [and] we’re at war. So I get this phone call from U.S. Army Special Operations Command, and they’re basically [saying], ‘Are you that ex-Army Ranger, now an ER doc?’ Yes, that’s me.’” Green recalled. “‘OK. You’re coming to the dark side of the Force.’ That’s how I wound up in special operations.”

One of his most memorable operations in the military, Green said, was being part of the military’s capture of fugitive Iraqi dictator Saddam Hussein on Dec. 13, 2003.

His military decorations include the Bronze Star and the Air Medal with a “V” for valor for action under heavy enemy fire.

Green says he sees his role now in Congress in a straightforward way.

“We have to show America who Democrats are. I think that’s probably our greatest mission right now,” he said, adding:

Green and his wife, Camilla, reside in Clarksville with their two children, Alexa and Mitchell.

When not working on policy in Washington or talking to constituents back home in Tennessee, he says, he enjoys being out in nature and calls fly fishing his “passion.”

He doesn’t hunt for big game, but likes to go after duck and upland bird.

“I’m an outdoorsman,” Green said. “I think it comes from growing up in the country and South Mississippi and then being in the military, being an infantry officer. I love fly fishing and hunting.”