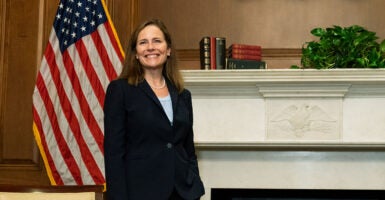 Senate Democrats, who generally have supported virtual hearings during the pandemic, now demand in-person hearings to consider Barrett. How is the Judiciary Committee’s Republican leadership responding? What kind of questions will Barrett face? Blackburn breaks it down.

The “Daily Signal News” podcast is available on Ricochet, Apple Podcasts, Pippa, Google Play, and Stitcher. All of our podcasts may be found at DailySignal.com/podcasts. If you like what you hear, please leave a review. You also may leave us a message at 202-608-6205 or write us at [email protected]nal.com. Enjoy the show!

Sen. Marsha Blackburn: I am thrilled to join you. Thank you so much for the invitation.

Del Guidice: Well, it’s great to have you with us. And you are part of the Senate Judiciary Committee. Next week, the confirmation hearings will be starting for Judge Amy [Coney] Barrett, who is President [Donald] Trump’s Supreme Court nominee. Can you tell us a little bit about how you expect these hearings to go given the whole current situation with coronavirus?

Blackburn: Yes. We are going to follow a model which has been in place for the Senate since COVID hit, and that is called a hybrid model. With this, the hearing is convened in person, but members and witnesses are allowed to attend virtually. All total, the Senate has done about 150 hearings under this model, and the Senate Judiciary Committee itself has done 21 hearings on this model.

Del Guidice: Well, Democrats have been supportive of virtual hearings up until now, but now they’re demanding in-person hearings. What is your perspective in response to all this?

Blackburn: They are trying to do anything they can do to delay this confirmation.

What they would like is to have a liberal justice on the court. The reason for that is because they don’t want to have a constitutionalist there who would block them from implementing socialized medicine and taking away the health insurance from 170 million Americans. They don’t want a justice who would block their implementation of the Green New Deal and step on your private property rights.

They want to be able to pack the Supreme Court. They want to be able to abolish the Electoral College and give statehood to D.C. and Puerto Rico. They have a very aggressive first 100-day agenda if they take the White House, the House, and the Senate, and that is what they are planning to move forward on. They know that the Supreme Court could get in their way of achieving their goal of implementing that agenda.

Del Guidice: How is the Senate Judiciary Committee Republican leadership responding to this pressure from Senate Democrats?

Blackburn: We’ve set the schedule, and we’re moving forward on the schedule. We just understand what it is that they are trying to do and why.

Del Guidice: Well, you’re very passionate about the judge’s personal life story. Can you talk to us a little bit about that?

Blackburn: She is a role model, and it should be an encouragement to all women that, indeed, you can be a wife, a mother, a lawyer, a law professor, a judge, and have a wonderful family and home life.

That is what Judge Barrett and her husband have done. They have seven children—two are adopted from Haiti, one has special needs—and they have figured out this work-life balance that so many of us … working moms have been able to figure out.

It is really encouraging to see her. She’d be the first mother with school-age children on the court. So what a great role model for so many women.

I find it also really interesting that what they’re trying to do is use her religion against her—but isn’t this what the left does? They take something that is a strength, and then they try to turn it into a negative. That is what they’re doing with Judge Barrett.

Basically, what they are saying, if you’re a woman of faith, if you’re active in your church, in your religion, if you take your children to church every Sunday, then that should be a disqualifier from serving on the federal bench.

We know that that is not right. It is expressly prohibited from having a religious litmus test in this country for people that want to serve on the judiciary. We know that a lot of the left would like to have only atheists or secularists on the federal bench.

Del Guidice: Sen. Blackburn, I want to get back to the judge’s role as a mom and some of the attacks she’s seen there, but I do want to ask you a little bit more about the attacks we’ve seen on her faith.

We saw them in 2017 with Sen. [Dianne] Feinstein, and I wanted to ask you, do you think it’s appropriate—we talked about this a little bit, but I want to talk about it a little bit more—to attack someone’s faith or religion during a confirmation hearing?

Blackburn: No, I don’t. This came up during her circuit court confirmation hearing. I have to tell you, to refer to your faith as dogma, to ask about orthodoxy in the manner that Sen. [Dick] Durbin did, to attack the Knights of Columbus—which is something we’ve heard come from Sen. [Kamala] Harris—in my opinion, it is just really misplaced and unseemly.

We have religious liberty in this country. We have the right to worship. For them to then begin to attack her and use this as a negative because she is a woman of faith is, I think, very unexpected and is something that’s going to turn a lot of people off.

Del Guidice: Going back to some of the attacks the judge has seen for her … serving as a mother to her children, there is a Boston University professor who had said that Judge Barrett was a racist and a white colonizer for adopting the two black children that she has. I just was wondering, do you have any response or perspective to that statement from this professor?

Blackburn: They feel as if you are pro-life, pro-family, pro-religion, pro-business, pro-military, then your voice does not deserve to be heard. Because of that, we know that they are going to be attacking her and continuing to attack her.

I thought it was so interesting when the reporter came out and said, “Oh, she has seven children. Does she have time to do this job?” Would they ever have said that about a liberal woman? …

So now, they’re going to attack her for those values, for the actions that she has taken, for not staying home and taking care of her children all day long, every day.

Del Guidice: Multiple Democrat senators—including Senate Minority Leader Chuck Schumer, Kirsten Gillibrand, Richard Blumenthal, a few more—have said that they are even refusing to meet with her before these hearings [start]. They said that this past week. What is your perspective on them refusing to even meet with her?

Blackburn: I think it’s so disrespectful to just not even show up because you want to make a point. Now, think about what they’re sending to millions of young girls and how they are completely discounting Judge Barrett.

Del Guidice: What do you suspect, Sen. Blackburn, [are] some of the questions she’ll receive from your colleagues, as well as the colleagues across the aisle?

Blackburn: Yeah, I think there’ll be questions about the issue of abortion, Roe v. Wade. You’re probably going to hear some about presidential overreach and immigration. You’ll hear some about campus free speech.

Then the Judge has done over a hundred opinions, so there are plenty of things for us to work through and filter through to glean questions. I would imagine most of my colleagues are like me, they’re working through that right now.

Del Guidice: How will you respond? Or how do you think it will be appropriate to respond if we see attacks that mirror what happened to now-Justice [Brett] Kavanaugh during his confirmation hearings? Are you expecting anything like that? How do you think that should be responded to if it does in fact happen?

Blackburn: Well, we certainly think that it’s going to happen. They have said as much. They want to delay the hearing so that she doesn’t get through prior to the election. So we’re going into it expecting to hear that.

The response should be, the president is doing his constitutionally-mandated duty by appointing someone. He is following the historical precedents of our nation in making this nomination. He’s not the first one to do it. It has happened 29 times in our nation’s history.

Now, we are going to do our constitutional duty. We’re going to take up the nomination to confirm her. We will vote either to confirm or not to confirm, and then we’ll send it back to the president.

Del Guidice: We’ve talked a little bit about how Judge Barrett is a mom of seven, she’s a professor at Notre Dame, served in the courts, and we’ve talked about the attacks that she has seen [from] people in this country for everything that she has done. I wanted to ask you, what is all she has done in the attacks we’ve seen on her really demonstrated about the president’s confidence in nominating her to the Supreme Court?

Blackburn: The president felt like she was the best individual for the job. She is a constitutionalist, she’s an originalist, and that is the type of justice he wanted to see serve on the Supreme Court. You’re going to hear her talk a little bit about that when she comes up for the hearings.

Del Guidice: Finally, Sen. Blackburn, we’ve talked a little bit about this, but given what we saw with Justice Kavanaugh and some of the attacks we’ve already seen on Judge Barrett, what is your overall perspective on how the media has handled the coverage of Judge Barrett so far?

Blackburn: They have shown their bias and their prejudice against her, and we expect it will continue next week.

Del Guidice: Well, Sen. Blackburn, it’s been great to have you with us on “The Daily Signal Podcast.” We hope to have you back talking about the hearings once they’ve started. Thank you so much for joining us.