Why California Should Let Markets, Not Mandates, Drive Vehicle Choice 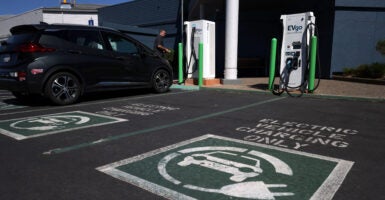 An electric car owner prepares to charge his vehicle at a charging station on Sept. 23 in Corte Madera, California. California Gov. Gavin Newsom signed an executive order directing the California Air Resources Board to establish regulations that would require all new cars and passenger trucks sold in the state to be zero-emission vehicles by 2035. Sales of internal combustion engines would be banned in the state after 2035. (Photo: Justin Sullivan/Getty Images)

You know what they say: If you can’t beat the competition … eliminate it.

That appears to be California Gov. Gavin Newsom’s approach when he signed an executive order to phase out the sale of new gasoline-powered cars in the state by 2035. The order also calls for a phaseout of conventional trucks and buses “where feasible” by 2045.

Newsom’s proposed ban of gas-powered cars is a serious affront to consumer choice and markets.

Granted, the transportation fuels sector could look very different 15 years from now, and the order could be largely irrelevant.

If consumers want electric cars, let market forces meet that demand. Nonetheless, Newsom’s proposal is backward thinking that that could have a number of adverse economic and environmental consequences.

Currently, electric vehicles account for about 2% of sales in the U.S. and 10% in California. Subsidies have boosted those sales, in which federal and state tax credits can surpass $10,000.

So far, electric cars largely have been a luxury item for wealthy households. According to research from the University of California at Berkeley, 90% of the tax credits accrue to America’s top income quintile.

A government mandate to “fuel” cars at outlets rather than gas pumps could put additional strain on California’s already strained electric grid.

Beyond that, there are immense economic costs as businesses cannot operate efficiently, if at all. The underlying problems of California’s grid are that there is no market structure that properly values reliability, that there is a lack of accountability among grid operators, and that policymakers have forced the premature shutting of many conventional power plants.

Perhaps California will wise up and introduce market reforms that actually improve reliability and affordability. If past is prologue, however, such reforms are unlikely. Even so, there were already concerns regarding how California will handle peak electricity demands with the increased adoption of electric vehicles before Newsom’s proposed ban.

Newsom’s strategy could also backfire environmentally. For instance, consumer behavior might shift on the purchase of a car. They may choose to buy a gas-powered car in-state before the ban takes place. Or, rather than buying a new, more fuel-efficient car, they could choose to hold onto their older vehicle longer or purchase a used vehicle out of state, which is permissible under the order.

These changes in purchasing behavior could result in more emissions than would have otherwise occurred.

It’s also important to note that, depending on the mining operations and which electricity source is used to charge electric vehicles, battery electric vehicles may have higher emissions than those that run on gas.

Furthermore, because used vehicle purchases are allowable under the plan, demand for such vehicles will likely increase, causing their prices to increase as well.

These higher prices could ripple throughout the vehicle market, affecting fleet turnover and hurting families, particularly middle- and low-income families who rely on lower-cost used cars.

Newsom would be more likely to achieve his vision if he would just let the market work.

If people want electric cars, a competitive market will demand that innovation continue to drive down battery cots and quality, such as improving battery degradation rates.

Ramping up production to larger scales could also reduce costs. As that occurs, more consumers will choose electric cars, pushing costs down even further, while simultaneously improving technology.

Markets can change dramatically, and in some respects, stay the same. Most Americans prefer larger vehicles for a variety of reasons, such as comfort, convenience, and safety.

The current No. 1-selling vehicle in the country is the same as it was 15 years ago: the Ford F-150. But the F-150 of today is very different than it was 15 years ago. It uses aluminum and the engine is smaller, but more powerful.

While the underlying preference for trucks is largely the same, the F-150 has steadily improved, as Ford continued to innovate to make the product better. Ford is also working on an all-electric F-150.

We can certainly look at trends and investments automakers are making in alternative fuel technologies, but the reality is that markets are unpredictable.

What is predictable, however, is that markets will continue to evolve to reflect consumer preferences, and if consumers want electric cars, which they seem to, market forces are a better way to serve that demand.

If electric cars and trucks are economically competitive, and the desired choice of drivers and the trucking industry, they will not need mandates and subsidies to get there.

Competition in the transportation fuels market that centers on consumer preferences—rather than government preferences—will result in more innovation and better products at competitive prices.

Technology and energy source-neutral competition allow the endless ingenuity of entrepreneurs to meet the wide range of consumer preferences while protecting taxpayers and customers from unwise investments.

It’s difficult to say what impact Newsom’s executive order will have by 2035. But today, it signals that California policymakers haven’t learned the lessons of the top-down, interventionist policies that have plagued the state’s energy markets and have harmed households and businesses.