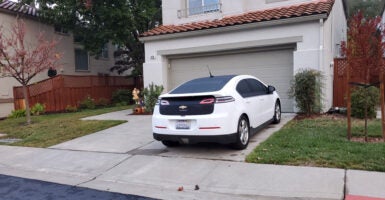 Donald van der Vaart is a senior fellow at the John Locke Foundation and a member of the Environmental Protection Agency’s Scientific Advisory Board, and serves on the North Carolina Environmental Management Commission.

Dominic Coletti is a research intern at the John Locke Foundation.

Yet, a 2019 watchdog report from the Treasury Inspector General for Tax Administration showed the electric vehicle tax credit is rife with fraud and abuse, and electric vehicle incentives disproportionately benefit the wealthy.

To add insult to injury, a recent report by the Environmental Protection Agency’s Science Advisory Board refutes the common perception that electric vehicles are good for the environment.

Perhaps unsurprisingly, the IRS has done little to stop the fraud and abuse, claiming the agency does “not have effective processes to identify and prevent erroneous claims for the Plug-In Credit.”

That means we taxpayers live with millions of dollars’ worth of erroneous, ineligible claims for hybrids, such as the Toyota Prius Prime, to the tune of up to $7,500 in tax breaks each.

After the release of the Treasury inspector general’s report, Sen. Ron Johnson, R-Wis., asked the IRS to share more about the tax credit.

The IRS’ response is exactly what you would expect from an entrenched government agency.

Officials claimed that something called “correctible error authority”—bureaucrat-speak for expanding the power of the IRS—would be necessary to address the fraudulent claims.

No, thanks. Americans would be much better off eliminating the tax credit than granting more authority to the IRS.

The electric vehicle tax credit is little more than a wealth transfer from working Americans to wealthy Californians. Twenty percent of all claims were made by Californians with adjusted gross incomes of more than $200,000, even though that group comprises only about 1% of total income tax returns filed in 2017. Out of the $486 million in credits claimed, $191 million—39%—went to California.

Data released in the IRS’ response to the watchdog report illustrated the overall poor-to-rich transfer. More than 3 out of 4 claimants in 2017—77%—had adjusted gross incomes of more than $100,000, even though only 19% of all tax filers made that much money.

Geographically, the credit is a California story. A full 40% of 2017 tax credit claimants resided there, even though Californians made up only 10% of tax returns filed.

By contrast, 12.3 million Texans filed with the IRS (just over 8% of total returns filed), but represented only 4% of total electric vehicle tax credit claims.

The state with the second-highest claims was Washington, which brought in $22.7 million, paltry when compared with California’s nearly $200 million in claims. Nearly 60% of the United States—29 states—had fewer than 1,000 tax credit claims, and eight had fewer than 100.

It’s indisputable: The majority of the country is subsidizing these credits for the wealthy in just a few states. That’s also ironic, since this tax credit was created to make electric cars more attractive to the average American.

The EPA’s Science Advisory Board recently wrote that “[electric vehicles] do not appear to be more fuel efficient than modern internal combustion engine vehicles that are similarly equipped.”

In fact, the board goes further, concluding that the increased electricity usage associated with electric vehicles may actually increase greenhouse gas emissions. For a policy that is designed to do the opposite, the electric vehicle tax credit is ineffective to a staggering degree, possibly even harmful.

The electric vehicle tax credit fails on every level: It fails to affect buying behavior; it almost exclusively benefits wealthy Americans in a handful of states; and the product it subsidizes does not achieve the stated purpose of reducing fuel consumption or greenhouse gas emissions.

It’s time to hit the brakes on the electric vehicle tax credit.