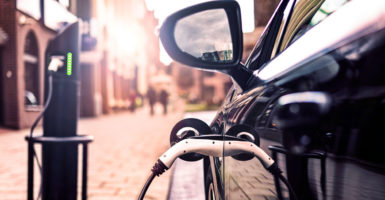 David Grogan is a member of the Young Leaders Program at The Heritage Foundation.

Eager to frivolously waste more taxpayer dollars, some legislators are now pushing to extend the electric vehicle tax credit and lift the cap on the number of vehicles that qualify for the credit by each manufacturer.

Doing so would reward special interests and only benefit the wealthiest Americans. Congress should instead eliminate the subsidies for electric vehicles.

Promoted as a way to wean Americans off their alleged addiction to oil, both federal and state governments have generous handouts for electric vehicles. Consumers can use up to $7,500 of other peoples’ money to buy an electric vehicle.

Add in-state and local incentives and that number can easily top $10,000. In Colorado, for instance, a buyer can use up to $12,500 in federal and state tax credits to buy an electric vehicle, not to mention enjoy other perks like subsidized charging stations, preferred parking, HOV lane access, and exemption from emissions testing.

The federal tax credit applies to the first 200,000 electric vehicles per manufacturer, and then a phaseout of the credit begins. Tesla is in the phaseout period now and General Motors Co. is close to hitting the 200,000 mark.

Both the House and Senate introduced legislation to lift the per manufacturer cap and extend the subsidy another decade. In a press release, sponsors of the Senate bill urged that “federal action is needed to ensure a competitive electric vehicle market that continues to provide the choice and ability for consumers to purchase electric vehicles.”

Competition is not built on the foundation of government dependence. If federal action is necessary to ensure competition, it is more indicative of how uncompetitive the technology is. Subsidies may increase electric vehicle purchases in the short-term, but they counterproductively stifle innovation by encouraging reliance on preferential treatment from Washington.

When subject to the marketplace, manufacturers will understand the true price point at which consumers value an electric vehicle. Without the government picking winners and losers, the companies would have properly aligned incentives to provide a better product at a competitive price.

This holds true for not only electric vehicle subsidies, but subsidies for all energy sources and technologies.

New research from the National Economic Research Associates shows that American households would, in fact, be worse off both as taxpayers and electricity consumers. The study projects that between 2020 and 2035, the average U.S. household would lose about $610 in personal income if the subsidy cap is removed. Cumulatively, total personal income of all American households would decrease by more than $7 billion over the 2020-2035 time frame.

If market-driven forces drove electricity prices higher as demand for electric vehicles increased, that would be one thing. But this is a cost borne as a result of the government pulling policy levers.

The indirect costs are particularly burdensome on lower- and fixed-income families who can’t afford electric vehicles and take advantage of the subsidies. Instead, the benefits of these subsidies accrue to America’s wealthiest households, which can also afford an electric vehicle without the subsidy.

For these reasons, Congress should reject all attempts to extend the federal electric vehicle tax credit, and seek to lift the per manufacturer cap. A coalition of free-market organizations, including Heritage Action for America, has already sent a letter to House Ways and Means Committee Chairman Rep. Kevin Brady, R-Texas, asking his committee to refrain from expanding the electric vehicle tax credit in any form.

Rather than picking favorites, policymakers should eliminate targeted tax credits for all transportation fuels and technologies. By eliminating the tax credit, the onus is on automotive companies to make electric vehicles competitive with gasoline-fueled cars.

By encouraging free and open competition in the electric vehicle industry, we will see companies bring innovations in their products and marketing that will make the electric vehicle market viable on its own—without the expensive, prohibitive, and stifling federal subsidies and mandates that exist today.