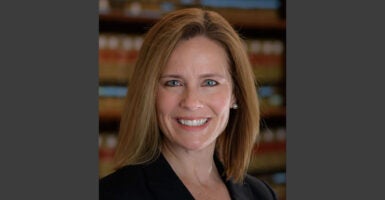 Senate Democrats have vowed to do everything they can to block Amy Coney Barrett’s nomination to the Supreme Court, but that will be hard given her impressive record, fidelity to the Constitution, and respect for the rule of law. (Photo courtesy of Notre Dame University)

While President Donald Trump has not yet announced a nominee for the late Justice Ruth Bader Ginsburg’s vacant Supreme Court seat, politicians and members of the press have already launched a full-scale assault on federal appeals court Judge Amy Coney Barrett—who has emerged as a leading contender for the vacancy—over her faith and religious beliefs.

A Reuters headline from Sept. 22 reading “As U.S. Supreme Court nomination looms, a religious community draws fresh interest” pointed to Barrett’s association with People of Praise, a Christian parachurch organization, and suggested the group was somehow “authoritarian” and discussed whether it should be considered a cult—even comparing it to the dystopian “Handmaid’s Tale.”

When asked this week whether Barrett’s faith was off-limits in any upcoming hearing, Judiciary Committee member Sen. Mazie Hirono, D-Hawaii, responded: “No.”

While the confirmation processes for Justices Neil Gorsuch and Brett Kavanaugh were by no means uncontentious, what we will most likely see in the coming weeks, given the stakes of this nomination, will make those earlier fights look tame by comparison.

The startling level of anti-Christian bias already on display against Barrett is a warning of what is likely to be leveled against whoever Trump nominates for this seat.

The recent attacks against Barrett mirror ones she faced during her 2017 confirmation hearing, in which Democratic senators asked pointed questions about her Catholic faith, suggesting Barrett’s religious beliefs disqualified her from serving on the federal bench.

In a now-infamous line of questioning, Sen. Dianne Feinstein, D-Calif., who serves as the ranking member on the Senate Judiciary Committee, stated, “The dogma lives loudly within you, and that’s of concern.”

Responding to Feinstein at the time, Barrett explained, “If you’re asking whether I take my Catholic faith seriously, I do, though I would stress that my personal church affiliation or my religious belief would not bear on the discharge of my duties as a judge.”

While some Democrats in the Senate have signaled a willingness to traffic in anti-Catholic fearmongering, others have thankfully pushed back on the tactic. For example, Sen. Joe Manchin, D-W.Va., who voted for Barrett’s confirmation to the 7th U.S. Circuit Court of Appeals, said Barrett’s Catholic faith should be off-limits in a possible confirmation hearing.

According to Manchin, “The freedom of religion is one of the basic rights we all have as an American citizen.” He continued, “Whether you’re Catholic, whether you’re Protestant, whether you’re Jewish, evangelical, whatever it may be, God bless you.”

However, Manchin’s Democratic colleagues haven’t shown the same reasonable respect for a person’s religious beliefs. When Hirono answered “no” regarding Barrett’s faith, she added, “Why should we say you get a lifetime appointment so that you can reflect your ideological agenda in your decision-making?”

Of course, testing a nominee’s fitness for public office based on their personal faith is barred by Article VI of the Constitution: “No religious Test shall ever be required as a Qualification to any Office or public Trust under the United States.”

In his written questions to Barrett during the appeals court nomination process, Sen. Sheldon Whitehouse, D-R.I., quizzed her about the Catholic Church’s teachings on marriage.

Despite the barrage of unfounded accusations being thrown her way, Barrett has already made clear that she will decide cases according to the law, not her personal views: “I think one of the great traditions in this country is that judges participate in the law, participate in the decision of cases, and rule even when they disagree with the outcome.”

The hostility from Democratic members of the Senate Judiciary Committee was not limited to Barrett. In 2018, Hirono and Sen. Kamala Harris, D-Calif., asked Brian Buescher, a nominee to the U.S. district court in Nebraska, about his membership with the Knights of Columbus, a faith-based service organization that supports traditional Catholic teaching on marriage, abortion, and human sexuality.

In fact, in questions submitted to the nominee on Dec. 5, 2018, Hirono explicitly asked Buescher if he would terminate his membership in the Knights of Columbus, an organization the 43-year-old nominee joined when he was 18. Hirono suggested the Catholic group had taken “a number of extreme positions” on social issues, including on abortion and marriage.

Of course, these “extreme positions” are what Christians have believed for 2,000 years.

While the nation awaits Trump’s announcement on Saturday, Senate Democrats—including the current Democratic vice presidential nominee—have already shown they are preparing to apply a religious test for office.

As we have seen before, it won’t matter who the nominee is. The president’s opponents are coming after them, and if they can use the nominee’s faith as a club to attack him or her, recent history says they will.

Whoever the nominee is, he or she must be prepared to defend his or her religious beliefs under intense scrutiny. But he or she should also know that he or she will not stand alone.