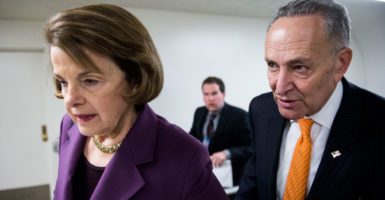 When President Donald Trump last month announced his nomination of federal Judge Brett Kavanaugh to the U.S. Supreme Court, Senate Minority Leader Chuck Schumer said that the “American people deserve to know what kind of a justice” Kavanaugh would be.

How do you measure something like the “kind of a justice” a nominee will be? Nominees, after all, do not take a Myers-Briggs test or come with a score or a grade. Fortunately, we have some guidance from none other than Sen. Dianne Feinstein, D-Calif., and Schumer, D-N.Y.

In 2006, Kavanaugh was serving as White House staff secretary when the Senate Judiciary Committee held its second hearing on his nomination to the U.S. Court of Appeals.

Feinstein, who today is the top committee Democrat, said, “Without a record as a trial lawyer or as a judge, it’s very difficult for some of us to know what kind of judge you would be.”

Three years later, the Judiciary Committee held its hearings on President Barack Obama’s nomination of another federal appeals court judge, Sonia Sotomayor, to the Supreme Court. She had been a judge on the U.S. Court of Appeals for nearly 11 years.

Schumer, a committee member in 2006 as well, said, “It is the judicial record, more than speeches and statements, more than personal background, that most accurately measures how modest a judicial nominee will be.”

Kavanaugh has been a judge on the U.S. Court of Appeals for nearly 500 days longer than Sotomayor when she was appointed to the Supreme Court. He has written more than 300 opinions and joined in hundreds more.

All of those opinions are publicly available now.

Did Schumer mean what he said on July 9, that the American people deserve to know what kind of justice Kavanaugh will be? Did he mean what he said in 2009, that it is a nominee’s judicial record that most effectively answers that question?

If so, then Kavanaugh’s judicial record should be front and center as the Senate evaluates his Supreme Court nomination.