Ben Sasse Mocks Democrats for Suspicions About the Knights of Columbus 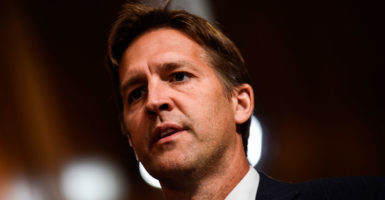 “It’s much more the stuff of community service, love of neighbor, fish fries, and pool parties than some sort of ‘Da Vinci Code’ stuff,” Sen. Ben Sasse says of the Knights of Columbus. Pictured: Sasse looks on during a markup hearing on Capitol Hill in Washington, D.C., Sept. 28, 2018. (Photo: Brendan Smialowski/Getty Images)

GOP Sen. Ben Sasse of Nebraska chided Democrats for pressing judicial nominees about their membership in the Knights of Columbus Wednesday, joking that some lawmakers have treated the Knights like the fanatical religious cult in “The Da Vinci Code.”

Sasse made the remarks during a nomination hearing for U.S. District Judge Peter Phipps, President Donald Trump’s nominee for the 3rd U.S. Circuit Court of Appeals. Democrats asked Phipps about his association with the Knights in 2018 before his confirmation to western Pennsylvania’s federal trial court.

“I want to ask you a hard question,” Sasse told Phipps. “Are you now or have you ever been involved in the organization of a fish fry?”

The Nebraska Republican went on to ask Phipps to describe the Knights of Columbus’ activities and lamented that his membership with the group was raised during his nomination to the district court.

“It’s much more the stuff of community service, love of neighbor, fish fries, and pool parties than some sort of ‘Da Vinci Code’ stuff,” Sasse joked. “I just want to be clear that I understand this scary organization.”

Democratic presidential candidate and Sen. Kamala Harris of California asked Phipps about the Knights of Columbus in a written supplement to his testimony in May 2018. As a Catholic organization, the Knights of Columbus supports pro-life positions, prompting Harris to ask whether Phipps could fairly preside over abortion disputes.

Harris also asked Phipps whether he had to swear an oath when joining the organization. The prospect of secret oaths is often featured in the anti-Catholic nativist rhetoric of the early 20th century, to the effect that members of the Knights of Columbus had sworn fealty to the pope in a struggle against liberal democracy.

Later in Wednesday’s hearing, Democratic Sen. Mazie Hirono of Hawaii insisted that Democrats were not attacking the Knights as such, saying she has never “suggested that a member of any organization is per se unfit for the bench, only those who cannot be fair and impartial.”

Judiciary Committee Democrats have quietly pressed judicial nominees about their association with the Knights before.

Harris and Hirono asked Brian Buescher, an Omaha lawyer tapped for Nebraska’s federal trial court, about his membership in the Knights of Columbus on a questionnaire that followed his November 2018 confirmation hearing.

The lawmakers called the Knights of Columbus an “all male society” that “has taken a number of extreme positions” on social questions like same-sex marriage.

In turn, Sasse introduced a resolution providing that it is unconstitutional to disqualify a nominee from public office based on their membership in the Knights of Columbus. The resolution was adopted by unanimous consent in January.

The Knights of Columbus controversy aside, Democrats oppose Buescher’s confirmation because of comments he made about abortion as a Republican primary candidate for Nebraska attorney general.

The Judiciary Committee forwarded Buescher’s nomination on a party-line vote in February and it is now pending before the full Senate.