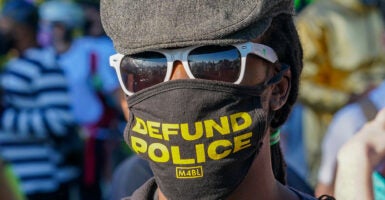 All of these matters of public health and public safety reveal the disasters that follow when common sense is ignored and ideology reigns. Pictured: A protester wears a face mask with "Defund Police" printed on it during a Black Trans Lives Matter rally in Hudson River Park, New York. (Photo: John Nacion/SOPA Images/LightRocket via Getty Images)

After the summer protests and rioting in many large cities, activists demanded a defunding, or at least radical pullbacks, of the police. So-called crime experts often concurred.

So some city governments ignored public warnings and diminished their police presence despite a sharp rise in crime in many cities. Looting and arson were often ignored.

If you call 911 in a large American city, there is no guarantee that anyone will answer promptly and send out police to aid the endangered. So gun sales have soared. Some people who never before owned weapons, or even opposed the use of firearms, are now terrified to remain unarmed. Self-protection often outweighs abstract ideology.

According to a recent Gallup poll, most black Americans favor maintaining or increasing police presence. Often, city officials who support cutting back on law enforcement still expect their own homes and property to be constantly policed. The same is often true of activist elites who live far from the inner city.

Large swaths of the American West are now charred by out-of-control wildfires. Some governors and many federal bureaucrats blame the conflagrations on climate change.

But those who actually live within forests, or on mountains and foothills, that are historically vulnerable to wildfires know that the epic droughts of 2013-2015 killed or dried out millions of acres of trees and vegetation.

Yet most of these decaying trees were never removed by authorities. They now predictably provide the fuel for the current wildfire Armageddon.

A few veteran forest managers have been proverbial voices in the wilderness in recent years. They warned that ignoring dead trees, limiting the sort of domestic animal grazing that reduces dead brush and dry foliage, forbidding timber companies from harvesting decaying timber, and preventing periodic controlled burns were collectively a prescription for the very disasters that now cloud Western skies with fires, smoke, and air pollution.

In other words, pragmatic people once understood that tens of millions of dead trees were not to be left alone as mulch for pre-modern ecosystems. In the present, the dried-up vegetation has served as veritable napalm, causing traditional fall wildfires to blow up into biblical conflagrations that consume homes, property, and people.

The public trust in science depends on its consistency, its transparency, and its divorce from politics and ideology. There can be no left or right, liberal or conservative, blue-state or red-state slant if scientific expertise is to be taken seriously.

Unfortunately, during the COVID-19 pandemic, the very opposite has sometimes occurred.

The World Health Organization initially swore that the virus was not transmissible by humans, did not warrant travel bans or mask-wearing, and was not a significant global threat. The organization’s Chinese patrons had given WHO an unscientific party line. And its director then branded the propaganda with superficial scientific authority.

American experts at the Centers for Disease Control and Prevention and other federal health agencies were often inconsistent on travel bans, testing, masks, quarantines, and medical therapies, and intolerant of dissident medical research.

Authorities rarely could consistently explain to the public how the virus was spread; why children, who were rarely stricken, were kept from attending school; and whether quarantines were aimed at flattening the curve of infection, eliminating it altogether, or just waiting out the virus.

The elderly were rightly deemed the most vulnerable. But then, inexplicably, they were often exposed to newly arriving infected patients in their long-term care facilities.

When millions of people hit the streets to protest the death of George Floyd at the hands of Minneapolis police, many health care professionals ignored the supposedly dangerous mass meetings that they had earlier insisted were major public health threats.

More than 1,000 health professionals, sympathetic to protests, even signed an open letter declaring that social activism was, for the moment, more important than social distancing.

When supporters of President Donald Trump then went to open-air rallies, many medical experts suddenly called these assemblies dangerous to public health. In truth, either both or neither types of public outings are dangerous.

All of these matters of public health reveal the disasters that follow when common sense is ignored and ideology reigns.

Most Americans know that only the police can protect the vulnerable in times of social chaos.

Most people instinctively sense that when vast swaths of dead trees are not removed from dense forests, they will eventually serve as kindling for raging firestorms.

And when scientific expertise offers ever-changing, inconsistent, and occasionally absurd public health advice, then people turn to their own instincts and innate common sense to protect themselves and their livelihoods.

Experts, not commonsense citizens, have been failing America.