The Facts of Cuomo’s Fatal Leadership During COVID-19 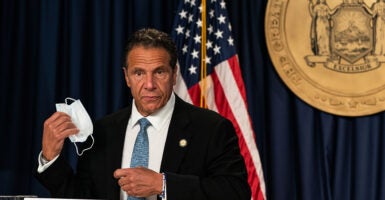 New York Gov. Andrew Cuomo argues that his crisis leadership during the COVID-19 pandemic is what brought New York out of dire straits. Pictured: Cuomo takes off a protective mask during the daily media briefing on July 23 in New York City. (Photo: Jeenah Moon/Getty Images)

After an alarming surge in new COVID-19 cases in June and July, the country has begun to see a decline in daily cases, putting us roughly back to early July levels.

These are encouraging signs considering the harrowing two-month period, but we are still adding tens of thousands of new daily cases nationally and still losing hundreds of lives to the virus each day.

All of that makes now an odd time for New York Gov. Andrew Cuomo to decide that it’s appropriate to write the book on crisis leadership in the time of a pandemic.

What Cuomo has in his favor is that New York’s daily case numbers have been stable for several months. In fact, the state has gone several weeks since recording more than 20 daily deaths. That’s the good news, and all Americans should rejoice that death’s grip on New York has finally loosened.

The bad news is that the state is still recording hundreds of new cases each day, and the low number of daily deaths occurring now came at the cost of nearly 33,000 deaths before.

For context, that’s currently twice the number of deaths recorded by New Jersey (nearly 16,000 as of this writing), which is second only to New York in deaths. The combined death counts of California, Texas, and Florida have only just surpassed New York’s deaths. It should also be noted that New York’s population is smaller than those of the three latter states.

It is particularly galling then that Cuomo, in his speech for the Democratic National Convention, said, “COVID is the symptom, not the illness … in many ways, COVID is just a metaphor.”

First off, COVID-19 stands for “coronavirus disease, 2019,” so it is neither a symptom nor an illness but a disease. Second, the coronavirus has literally, not metaphorically, killed nearly 180,000 Americans, the largest proportion of whom were New Yorkers.

The idea that COVID-19 could ever be described as “just a metaphor” is revolting, especially coming from the man who presided over such concentrated carnage.

Cuomo argues that his leadership is what brought New York out of dire straits. Indeed, in those remarks, he described New York as “ground zero for the COVID virus,” though he said they’ve gone from “one of the highest infection rates on the globe to one of the lowest.”

Never mind that the first confirmed case and the first outbreaks in the United States occurred in Washington state, not New York.

Moreover, there’s been increasing speculation that the infection begins to burn itself out after about 20% of a population has been infected. New York City, as it turns out, has reached that level with an estimated 19.5% of its population infected, as antibody surveys have suggested.

During the same period, the Philadelphia area, which was also hit hard by COVID-19, has had an estimated 3.8% of its population infected. It seems less likely that Cuomo’s able leadership ended the pandemic in New York and more likely that, under his watch, the virus burned through the population and is running out of New Yorkers left to infect and kill.

Although he may have proved ineffectual in halting the spread of the virus, he did do something that had an enormous effect: He sent the virus into the midst of those most vulnerable to its worst consequences.

To be clear, policymakers deserve a tremendous amount of grace for making mistakes in the early pandemic response, but the decision to force nursing homes to admit patients with COVID-19 was completely inexcusable.

There were very few things we knew about the coronavirus at the beginning, but one of the very few things we knew for certain was that the virus had a particularly deadly effect on the elderly. Yet the Cuomo administration, as late as March 25, went ahead and required nursing homes to admit or readmit patients despite their having a confirmed or suspected case of COVID-19.

There are numerous ways to describe the effect of this policy, but this headline is rather concise: “NY nursing home vacancies soar during COVID-19 crisis.” This is why it’s so maddening to hear the man responsible for all the above say, “We proved that our way succeeded.”

For this to be called a success, the bar would have to be set approximately 6 feet below ground in a lonely plot. It is fair to give leaders and policymakers credit for making tough decisions in highly uncertain times, but it is also fair to expect a modicum of humility and self-awareness of them.

Cuomo, who presided over the worst pandemic response in the country and whose policy actively and directly made it worse, has no business writing a book to congratulate himself on a job well done. He deserves exactly zero plaudits for good leadership and should be remembered for, if anything, his “impossible mountain” of death.