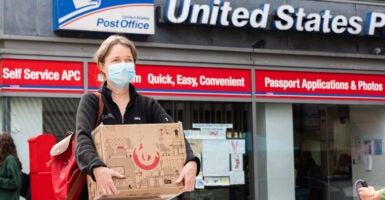 A federal judge unjustifiably has enjoined needed U.S. Postal Service reforms proposed by Postmaster General Louis DeJoy. Pictured: A woman wears a face mask outside a post office on the Upper West Side of Manhattan on Sept. 18 as New York City continues Phase 4 of reopening following restrictions imposed to slow the spread of the coronavirus. (Photo: Noam Galai/Getty Images)

The Sept. 17 ruling is the latest in a string of factually challenged attacks on Postmaster General Louis DeJoy.

Bastian (who was appointed by President Barack Obama) has overstepped the bounds of proper judicial activity, and the ruling will damage the independence and efficiency of the Postal Service.

DeJoy, a logistics expert, assumed his role in June amid many challenges for the USPS. They include thousands of postal workers being quarantined at any given time due to the COVID-19 pandemic, which slows routine operations in the hardest-hit areas.

The Postal Service also suffers from serious financial issues. It has run a multibillion-dollar deficit every year since 2007 and has accumulated $161 billion in liabilities.

Against that backdrop, DeJoy sought to save money and potentially improve performance through an initiative that would prioritize having delivery trucks leave on time. He based this plan on a report by the nonpartisan Postal Service Office of Inspector General, which revealed that late truck and postal carrier departures led to huge costs through excess overtime labor.

Over the weeks following the changes implemented by DeJoy in July, there was an increase in late deliveries. It’s impossible to determine whether this was primarily caused by COVID-19 worker quarantines or by DeJoy’s initiative.

The point is that, if we don’t know what caused it, then neither did the judge issuing this injunction. His order seems based on wild and intemperate speculation, rather than actual evidence.

He apparently believes, without justification, critics who seized on the mail slowdown as proof of a sinister conspiracy involving DeJoy and President Donald Trump attempting to sabotage mail-in voting. That makes little sense, given that millions of Republicans also vote by mail—just like Democrats.

Many viral myths were circulated about the Postal Service, most of which are easily debunked with basic facts.

While DeJoy ultimately decided to pause the July delivery initiative in the wake of the unfair criticism, that was not enough to satisfy his opponents.

State governments filed dubious lawsuits aimed not only at the already-stopped delivery plan, but also at many Postal Service practices that predate both DeJoy and Trump.

Unfortunately, the order from Bastian accepts several blatantly wrong allegations as fact, and then uses those allegations to justify an overbroad ruling.

A prime example of his errors appears on page 3 of the ruling. Bastian lists five “other actions taken by DeJoy” that either did not happen or were not started by DeJoy:

Later, Bastian asserts—again without evidence—that the delivery initiative and the above items are clearly an attempt at voter disenfranchisement. A key piece of evidence was not any memo or quote from DeJoy, but rather tweets and other comments made by Trump regarding the problems with mail-in voting, problems acknowledged by many experts, regarding everything from increased risk of ballot fraud to late delivery by the Postal Service.

Actions taken before DeJoy’s arrival cannot possibly be part of an anti-voting plan unless the previous postal leadership was also involved, which none of DeJoy’s critics allege.

In any event, tweets made by an elected official raising serious concerns over an issue are not proof of malfeasance by someone else—such as a postmaster general who is under the supervision of a bipartisan board of governors, not the president.

At one point, the judge even says that the proposed reforms cannot be “the result of any legitimate business concerns” because the lawsuit was filed by 14 states and members of the House and Senate, as if the fact that states and members of Congress are willing to sue the president over a particular policy somehow means their claims must be legitimate.

Under that fallacious reasoning, the judge must think that the U.S. Supreme Court and various courts of appeal have all ruled the wrong way over the past four years when they have ruled in favor of the administration and against various states and members of Congress.

For a federal judge to make such a clearly erroneous claim is astonishing.

Another nationwide postal ruling was issued by Judge Victor Marrero (an appointee of President Bill Clinton) on Sept. 21. The second injunction hinges on the idea that any late delivery of a mail-in ballot amounts to disenfranchisement, even though the Postal Service has struggled to meet on-time delivery standards for regular mail for years.

This ruling is less overtly political, but still amounts to judicial activism by making demands on the Postal Service that are not required by law and that it may not be able to meet.

No one disputes that the Postal Service faces serious challenges. Its moribund, inefficient operations must be changed to reflect the reality of 21st-century life.

The Postal Service is already restrained from many potential cost-saving changes by Congress, and now DeJoy and future postmasters general will have to worry about rogue judges overturning legitimate reform plans with specious reasoning based on unproven, politically motivated, partisan claims.