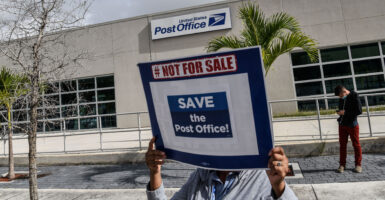 Rather than drafting legislation to reform the U.S. Postal Service and make it financially sustainable, both houses of Congress seem intent on a shortsighted taxpayer-funded bailout. Pictured: People attend a rally Aug. 25 in Miami in support of the Postal Service. (Photo: Chandan Khanna/Agence France-Presse/Getty Images)

A stream of apocalyptic predictions and strained conspiracy theories have turned the once-sleepy world of U.S. Postal Service operations into front-page news.

Lawmakers focused on the topic are being confronted with an approaching deadline. By the end of 2021, the Postal Service is on pace to run out of funds needed to continue current operations.

Several proposed and potential pieces of legislation would provide a bailout worth tens of billions of taxpayer dollars to the Postal Service, supposedly justified by the COVID-19 pandemic.

Yet there’s a big problem with this line of thinking: The pandemic has had a minimal effect on the Postal Service’s bottom line.

As a result, a COVID-19 bailout would be the equivalent of giving someone a blood transfusion while ignoring gaping wounds.

The financial status of the Postal Service burst into view in March, when leadership of the House Oversight and Reform Committee warned that bankruptcy was imminent due to COVID-19. Congress included a $10 billion loan to the Postal Service in the CARES Act based on these fears.

Just a few weeks later, it became apparent that warnings of an immediate collapse were unwarranted. While revenue from letter mail was down, demand for package deliveries increased strongly enough to compensate, meaning that the organization is not going belly-up in 2020.

This trend was confirmed in the latest quarterly report detailing the Postal Service’s performance from April through June. At first glance, the numbers appear grim: In just three months, the organization suffered a $2.21 billion loss.

However, placing that number in context tells a different story. The Postal Service lost $2.26 billion during the same period of 2019, and $4.52 billion for the first three months of 2020.

If COVID-19 were the reason for the Postal Service’s difficulties, we would expect the losses to be worse during the first months of the economic lockdown, not better.

The Postal Service has lost money every year since 2007, even during periods of strong economic growth. There are two big reasons for this troubling trend.

First, as communication increasingly moves online, the number of letters has plunged from its peak in 2001. That means less revenue to maintain postal facilities and pay employees.

Second, Congress has handcuffed the Postal Service when it comes to controlling costs. The largest expense, employees, can be reduced only through layoffs, rather than through lowering the generous compensation of $97,588 per worker.

Many potential operational changes, such as switching from six deliveries per week to five, also are barred by law.

Even when the Postal Service does have the ability to cut costs, it can result in a swift backlash from Capitol Hill. That was evident in recent weeks as lawmakers chastised Postmaster General Louis DeJoy regarding the removal of sorting machines, which was set in motion before he arrived and has been taking place for years.

Rather than drafting legislation to reform the Postal Service and make it financially sustainable, both chambers of Congress seem intent on the shortsighted approach of a taxpayer-funded bailout.

The House passed a $25 billion bailout that wrongly includes further restrictions on cost-cutting. A bipartisan Senate bill provides up to $25 billion to cover postal losses “resulting from the COVID-19 pandemic,” a definition that could potentially be used to cover any postal losses during the pandemic, regardless of the actual cause.

Senate leadership is considering whether to turn the $10 billion CARES Act loan into a grant. That would improve the Postal Service’s bottom line at the expense of adding to the national debt.

DeJoy has requested supplemental funds from Congress to cover additional expenses related to COVID-19, such as providing masks to employees and installing transparent dividers at retail locations. The amount needed to address those costs would not be $10 billion or $25 billion, but instead closer to $1 billion.

Another common justification for a bailout is the upcoming election, which is expected to feature record levels of mail-in voting. DeJoy has repeatedly explained that there’s no need for extra funding to cover mailed ballots.

Even if every vote this year were sent by mail within a few days, that would amount to about 5% of a typical week’s volume. Since mail-in ballots are sent over the course of months, and since letter-mail volume is down this year, the Postal Service will have no problem delivering ballots.

Unfortunately, the largest bailout idea of all is still gaining traction on the left; namely, turning the Postal Service, which is supposed to be self-sufficient, into a standard federal agency.

Such a move would socialize postal losses of billions of dollars per year and add the organization’s massive unfunded liabilities to the nation’s already unsustainable financial future, for the sake of providing a service that is growing less relevant over time.

Rather than using the hard-earned money of millions of Americans to preserve an antiquated vision of the Postal Service, Congress should get to work on legislation that would end chronic deficits and eliminate widespread inefficiencies.

Heritage Foundation analysts (including the now-deceased James Gattuso) produced a paper this spring, “Congress Should Free the Postal Service, Not Bail It Out,” which identifies a variety of postal policy options available to legislators.

Tackling the Postal Service’s many problems will be no small task. However, this is precisely the sort of problem that we should expect our nation’s leaders to address in a responsible manner, rather than temporarily “fixing” it through pricey bailouts.