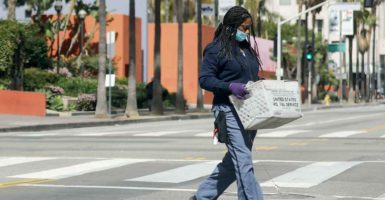 A $10 billion loan to the United States Postal Service was included in the third coronavirus relief bill, which passed the Senate late Wednesday night. Supporters of the loan claim that the service is in danger of going bankrupt in the next few months.

But the Postal Service’s fiscal crisis does not relate to the pandemic at all. In fact, it has been hurtling toward bankruptcy for years. As with most chronic problems related to the federal government, Congress has refused to act, placing short-term political considerations ahead of the nation’s long-term needs.

Congress kicked the can as far as it could. Now it must face reality and address the viability of the Postal Service.

The $10 billion loan in the relief bill is contingent on the Postal Service using the funds to maintain operation. This is extremely problematic, but it is way better than what House Democrats proposed: a massive bailout, including elimination of $11 billion in outstanding debt, subsidies worth $25 billion, and an additional $15 billion loan.

Neither the loan nor the bailout would address the Postal Service’s underlying problems.

First, the volume of first-class mail has plummeted 47% from 2001 to 2019. Overall income for the service is falling after adjusting for inflation, but costs are increasing. As a result, the Postal Service has had an operating deficit for the last 13 years, with 2019 reaching a record $8.8 billion loss.

The cause of this financial meltdown at the Postal Service is not hard to find. The simple fact is that the letter is being replaced by digital technologies: email, texts, online bill paying, and the internet. Americans simply don’t need mail as much anymore.

For more than a decade, the Postal Service has been sounding the alarm about the impending postal catastrophe. It could not stop the wave, but it could adjust to the new realities and avoid collapse, or at least lessen the impact.

With that effort having failed, Congress should do more than send cash. It should address impediments to the Postal Service surviving in today’s world. Among these:

Elimination of these barriers could close the operating deficit, leaving just the mounting burden of paying for health and pension benefits to its retirees.

According to a 2018 report by the Treasury Department, the Postal Service has around $120 billion in unfunded liabilities to its retirees. Paying for these benefits will require it to return to much firmer financial footing.

Thus, reforming postal delivery would only be a start, serving to move the Postal Service from critical care to the infirmary. But at least it would mark the start of treatment. That is more than the current legislation does.

We can expect many members of Congress to blame the coronavirus if the Postal Service falters in the near future. In reality, the representatives have only themselves to blame.