Restoring Justice for All in America’s Criminal Justice System 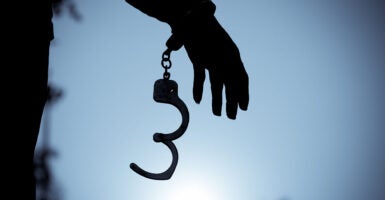 The First Step Act was a major victory for meaningful criminal justice reform at the federal level, but it was not the administration’s only such move. (Photo: Chanin Wardkhian/Getty Images)

As part of his broader economic and public safety agendas, President Donald Trump promised in his first State of the Union address to “embark on reforming our prisons to help former inmates who have served their time get a second chance at life.”

The administration has brought some meaningful reform to the federal criminal justice system. At the same time, the president has used his executive authority to grant clemency to a number of individuals that he believed had received disproportionate sentences or were victims of unjust prosecutions.

In December 2018, the president signed one of his signature legislative accomplishments, the First Step Act, into law after Congress passed the legislation with overwhelming bipartisan support.

The First Step Act brings a problem-solving approach to the federal criminal justice system. It requires federal prison officials to use objective risk assessment tools to analyze each federal inmate’s risk of recidivating once released.

Using metrics such as substance abuse habits, mental health issues, lack of job skills, and anger management problems, the law authorizes officials to categorize individuals and assign them to prison programs that are designed to help them address their struggles and reduce the likelihood that they will return to crime.

These new programs will be offered in part by private, religious, and nonprofit organizations. By participating, certain inmates will have the chance to earn time credits that can be redeemed for early transfer from prison to a halfway house, supervised release, or home confinement.

The First Step Act was based on state-level criminal justice reforms that have resulted in reduced costs and improved outcomes. For example:

These reforms included making the Fair Sentencing Act of 2010, which reduced the disparity between crack and powder cocaine sentencing, retroactive. According to the Department of Justice, as of April 2019, that reform “ha[d] resulted in 826 sentence reductions and 643 early releases.”

The First Step Act was a major victory for meaningful criminal justice reform at the federal level, but it was not the administration’s only such move. Trump also began to use his executive power to grant pardons and sentence commutations to individuals whom he believed were the victims of injustices.

During the first two years of his term, Trump issued seven pardons and four sentence commutations. These included a posthumous pardon for the late boxing great Jack Johnson, who was the victim of a racially discriminatory prosecution, and the commutation of Alice Johnson.

Unfortunately, despite its commitment to criminal justice reform, the Trump administration has not embraced reform of civil asset forfeiture.

Civil forfeiture—the law enforcement tool that authorizes the seizure of property or currency suspected of being either criminal proceeds or instrumentalities—has been broadly criticized for its perverse financial incentives, insufficient protection of due process, and notable abuses.

To date, 32 states have reformed or abolished the practice, but Congress has yet to act, and early in the Trump administration, then-Attorney General Jeff Sessions reinstated a highly controversial civil forfeiture practice known as “adoptive forfeitures,” which has been widely criticized for undercutting those state reforms by financially encouraging state and local agencies to circumvent protective state laws.