Trump’s Use of Pardon Power Aims at Rectifying Injustice 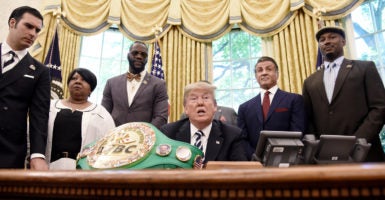 Since taking office, President Donald Trump has granted pardons and sentence commutations for a number of individuals who he thinks received an unjust federal prison sentence or were unjustly prosecuted and convicted of a federal crime.

In some cases—particularly in granting the early 20th-century black boxing champion Jack Johnson a posthumous pardon, and taking meetings on criminal justice issues—Trump is drawing flak, when he should be getting kudos for working to address instances of manifest injustice.

On Oct. 9, Trump reiterated his commitment to using the presidential pardon power, saying that he was “actively looking” at more federal inmates in similar situations.

Speaking from the Oval Office, Trump said that there are “a lot of people … that will unfortunately be locked up for many, many years, and there’s no reason for it.”

Trump’s comments came before a widely publicized meeting on Oct. 11 with rapper Kanye West and pro football Hall of Fame running back Jim Brown, during which the three discussed, among other things, prison reform and presidential pardons.

Yet, one commentator called the meeting a “minstrel show,” and others used it as an opportunity to mock both West and Trump.

But that’s nothing new. Other commentators reacted similarly earlier this year, when Trump pardoned Johnson, the first African-American to become the heavyweight boxing champion.

Yet Johnson’s case was exactly the kind of miscarriage of justice for which a pardon or sentence commutation is entirely appropriate. Going forward, it’s a model for other cases for Trump to rectify.

While Johnson died in 1946, his pardon is no less important than, say, Alice Marie Johnson’s sentence commutation on June 6 or Dwight and Steven Hammond’s pardons on July 10.

Pardons and commutations do not simply rectify the injustices committed against specific individuals. Rather, they also point out how government can make mistakes and abuse the criminal law, even in ways that fundamentally undermine the principles of liberty we as Americans hold so dear.

Johnson was a professional boxer during the Jim Crow era. He faced countless obstacles as a boxer and as a black man. Ultimately, racial discrimination is what put him in federal prison.

During the late 19th century and early 20th century in America, racism gave rise to fearmongering that black men would traffic white women into prostitution, giving rise to a form of “white slavery.”

In 1910, Congress responded by passing the Mann Act, formally known as the White Slave Traffic Act.

The law made it a federal crime “to transport … in interstate or foreign commerce … any woman or girl for the purpose of prostitution or debauchery, or for any other immoral purpose.”

While the law was enacted to prevent human trafficking and coerced prostitution (as opposed to voluntary adult prostitution), the Mann Act was overzealously enforced, stretched the limits of Congress’ legislative authority under the Commerce Clause (despite being upheld by the Supreme Court; see here and here), and embodied the unfortunate ills of racism.

The now-deceased criminal law professor William Stuntz, in his book “The Collapse of American Criminal Justice,” characterized the Mann Act as a law that “criminalized far more conduct and authorized punishment of far more people than Congress’s purpose could plausibly justify. A ban on coerced prostitution morphed into a ban on extramarital sex … .”

In Caminetti v. United States, the Supreme Court affirmed the Mann Act convictions of “two adulterous men who did nothing more harmful than take a train across state lines in the company of their mistresses.”

Johnson had a similar story.

After Congress passed the Mann Act in 1910, the Justice Department and the FBI began investigating Johnson almost immediately for violations of the law, as he had a reputation for dating and traveling with white women, supposedly “for an immoral purpose.”

But prosecutors failed to establish a Mann Act case against Johnson until 1912.

After the FBI located a suspected prostitute—a white female named Belle Schreiber—who had been previously involved with Johnson, the Department of Justice convened a grand jury, which indicted Johnson on seven violations of the Mann Act for the time Johnson traveled with Schreiber from Pittsburgh to Chicago in 1910.

In 1913, an all-white jury convicted Johnson on all seven counts, and he was sentenced to one year and one day in federal prison.

Johnson fled the country to escape his sentence until he returned in 1920 and surrendered to federal authorities. He was released from federal prison in 1921.

Civil rights groups and others had long advocated Johnson’s pardon, to officially recognize that his prosecution and conviction embodied racial hostility and intolerance.

Yet, no president until Trump was willing to grant the pardon, which he did on May 24.

As Trump remarked from the Oval Office on the day he granted the pardon, “[Johnson] had a conviction that occurred during a period of tremendous racial tension in the United States, more than a century ago. Johnson served 10 months in federal prison for what many view as a racially motivated injustice. He was treated very rough, very tough.”

Many applauded the president for his action. Unsurprisingly, others did not.

Some on the left accused the president of using Johnson’s pardon to exonerate himself from charges of racism (see here) or to satisfy a desire for attention (see here).

One liberal commentator, under the guise of “sports editor,” went so far as to say that Trump himself would have tormented Johnson if the president were alive during the boxer’s day.

Today, commentators often are too keen to falsely claim that our entire criminal justice system is “racist … front to back,” and that it needs to be overhauled, not just reformed, to prevent and correct rare instances of manifest injustice.

But that should not, and likely will not, stop Trump from taking similar actions with his pardon power in the future.

By pardoning Johnson, Trump officially recognized an abhorrent blemish in America’s legal history for what it was—something no other president was willing to do.

Whether the left is willing to recognize that or not, Trump’s pardoning of Johnson was a symbolic, but significant, step to right a past wrong against the black community. For that, he deserves much credit.

Before his recent meeting with West and others on criminal justice issues, Trump again signaled that he is open-minded about granting pardons and commuting sentences.

For that, too, he deserves credit and, instead of criticism, more recommendations.