Combating the Tyranny, Waste, and Economic Devastation of ‘Green’ Agenda With Free Enterprise 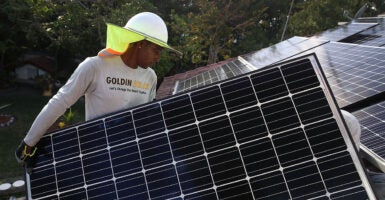 Roger Garbey from the Goldin Solar company installs a solar panel system on the roof of a home a day after the Trump administration announces it will impose tariffs of as much as 30% on solar equipment made abroad on Jan. 23, 2018, in Palmetto Bay, Florida. (Photo: Joe Raedle/Getty Images)

Since publication of the last Mandate for Leadership, the Trump administration has taken productive steps to open access to energy development and reduce the regulatory burdens that have driven up energy costs while producing minimal to no environmental benefits.

Withdrawing the signature pieces of the Obama administration’s climate legacy—the Clean Power Plan and the New Source Performance Standards for new power plants—provided much-needed regulatory relief. The president also announced the intent of the U.S. to withdraw from the costly and ineffective Paris climate agreement.

The president approved the Keystone XL pipeline, and his executive orders on the National Environmental Policy Act and energy infrastructure wisely called for modernization, improved efficiency, and good-governance measures for clarity and consistency across agencies in key permitting and regulatory activities.

The energy potential of the section now open is enormous, and will provide much-needed economic opportunity for remote communities, in addition to which the environmental footprint is minimal.

In other instances, not doing anything at all was a win for energy consumers.

So far, the current administration has backed off from subsidizing specific coal and nuclear power plants. The plan would not have had any measurable impact on grid resilience and reliability but would have significantly disrupted competitive electricity markets, hurting consumers and choking off opportunities for new market entries.

President Donald Trump’s budget routinely proposed reduced spending for energy subsidies and also activities that are not legitimate functions of the federal government.

The news is not all good, however. Under this administration, the Environmental Protection Agency continues to ramp up volumetric requirements under the Renewable Fuel Standard. The mandate requires that refiners blend costly biofuels into America’s fuel supply, and the administration has catered to the special interests of the biofuels lobby at the expense of consumers.

Moreover, the Trump administration imposed tariffs on solar technology imports in 2018, and its steel and aluminum tariffs increase the cost of energy projects domestically. Borders should not mean that individuals are forced to pay artificially higher prices for energy.

Cronyism also is still prevalent in the energy sector, and the government allocates special benefits to the well-connected instead of fostering a playing field that provides opportunity for all to compete.

These subsidies obstruct the long-term success and viability of the technologies and energy sources that they are intended to promote by distorting the actual costs of energy production and interfering with the price signals by which businesses monitor supply and demand.

Removing the cronyism and corporate welfare that are pervasive in energy markets is no easy feat. The Trump administration’s attempt to rescind unused funds in the U.S. Department of Energy Advanced Technology Vehicles Manufacturing loan program provides a good case study.

In handing out only five loans, the program has wasted taxpayer dollars by subsidizing economic losers (Fisker) and has promoted corporate welfare by subsidizing well-off companies (Nissan and Ford). The program has $4.3 billion remaining but has been idle for more than eight years without a new loan administered by the department.

Special interests prevailed, however, and the program remains in place.