What Kind of Revolution? 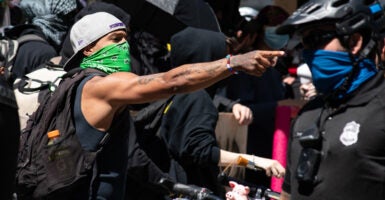 Which revolution will be our guide as we answer the challenge of “systemic racism” and protect that most vital ingredient of our republic—ordered liberty? Pictured: A man disrupts an Aug. 9 rally at Seattle City Hall against defunding the Seattle Police Department. (Photo: Noah Riffe/Anadolu Agency /Getty Images)

The French Revolution swept away the culture and the politics of the old regime in the name of liberté and was cut short by the guillotine. The American Revolution created a new political order that declared “We the People” shall govern and guaranteed that they would under the U.S. Constitution. The Bolshevik Revolution ushered in Marxism-Leninism and resulted in the deaths of more than 100 million.

We are in the midst of another revolution that affects every institution—political, economic, and cultural—from the U.S. Capitol to Wall Street to Hollywood.

Which revolution will be our guide as we answer the challenge of “systemic racism” and protect that most vital ingredient of our republic—ordered liberty? Will we seek to solve the crisis by reason and debate or by passion and demonstration?

Setting aside the Bolshevik model as totalitarian, we must choose between the French and American revolutions as our guide.

Symbols are all important in a revolution, never more than today in the age of social media. Which symbols will dominate this revolution—the guillotine or the Constitution? What will be our motto—Black Lives Matter or E Pluribus Unum?

Where will we settle our differences—in the halls of Congress or in the streets of Seattle, Minneapolis, and a hundred other cities? What will be our legacy—freedom or tyranny?

In a crisis such as ours, symbols can inspire and unite. They also can anger and divide. What symbols have commanded our attention these past weeks?

A white cop apparently fatally chokes a black man with a knee. Rioters set fire to an historic church across from the White House—and vandalize it a week later. Also in the nation’s capital, vandals spray-paint slogans on the Lincoln Memorial and the World War II Memorial. Left-wing activists establish an autonomous “people’s zone” in Seattle and try to do the same in downtown Washington, D.C.

King Chaos reigns throughout much of the land, and modern Jacobins silence anyone who questions them.  MIT forces out a chaplain over his email that condemns George Floyd’s death but notes his criminal record. Critics condemn a UCLA professor for reading Martin Luther King Jr.’s inspiring “Letter from a Birmingham Jail” in class, because it contains the N-word.

The left routinely defames and destroys cultural icons. Vandals pull down a statue of Junipero Serra, an 18th-century missionary and Catholic saint. HBO removed the movie classic “Gone With the Wind” from its library. Can “Huckleberry Finn” be far behind?

Is all this just random violence and cancel culture or is there a pattern? Is the goal of the demonstrators an end to racism in America or an end of academic freedom and political pluralism in America? Are the targets of the mob—a church, a revered president, a just war, a human rights champion—haphazard or deliberately chosen, calculated to undermine public confidence in the pillars of our society?

Surely, you say, that can’t happen here in this land of laws and the Declaration of Independence and the Constitution, in this citadel of democracy. Or can it?

The insightful Chris Bedford, a senior editor at The Federalist who likes to ask difficult questions, writes that if reason and not chance is behind this Jacobin moment, then “targeted killings” of the Jacobins’ opponents and critics may be next.

I hope and pray and believe that will not come to pass. To ensure there will be no modern-day Reign of Terror, however, all of us must take measured steps to protect our most precious possession—ordered liberty.

We can do that by:

—Freely acknowledging that real racism exists in America, not systemic but all too systematic.

—Supporting a national conference on racism that includes Americans of all races, ethnicities, and economic and social backgrounds.

—Supporting a series of nationally televised “great debates” on racism in America.

—Advocating national legislation prohibiting the use of excessive police force, house searches without a warrant, early use of tear gas during public demonstrations, and the deliberate defacing of public monuments and memorials in the nation’s capital and elsewhere.