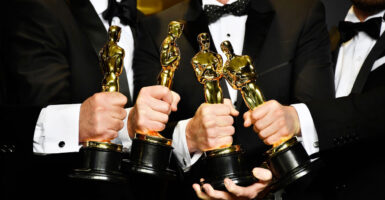 The Academy Awards will have a diversity checklist for movies to win the Best Picture Oscar beginning in 2024. (Photo: Frazer Harrison/Getty Images)

Hollywood will now be enforcing a woke moral code.

Since Hollywood apparently isn’t woke enough already, the Academy of Motion Picture Arts and Sciences announced on Tuesday that it will add hard diversity requirements for movies to qualify for Best Picture at the Oscars.

Best Picture is considered the highest-level award a film can receive.

As Kyle Smith wrote in the New York Post, the move is essentially the academy “announcing it was formally rejecting the pursuit of artistic quality in favor of a byzantine quota system.”

The requirements are extensive, though they can be achieved through a variety of means.

One lead or significant actor in the movie must be from a list of “underrepresented” racial or ethnic groups.

Or at least 30% of secondary actors must be from a list of “underrepresented” groups, including women, “LGBTQ+,” or disabled people.

Or the storyline of the movie must be about one of the listed underrepresented groups.

The requirements also include a diversity quota for department heads and technical jobs relating to the movie, and an “audience development” requirement, again geared toward that list of underrepresented groups.

You can read the entire list of requirements here. The rules are set to take effect in 2024.

Anyone who has paid even the slightest attention to the Oscars in recent years—an increasingly small and no doubt further shrinking group—would have little illusion about the fact that the awards are already heavily biased toward wokeness.

The Oscars awards ceremony typically includes a heavy dose of left-wing lecturing. Modern Hollywood, aside from a few, mostly underground corridors, is hardly a place of diverse intellectual thought.

But after the “#OscarsSoWhite” Twitter barrage in 2015, it seems that Hollywood is absolutely desperate to signal to the world that wokeness shall henceforth be mandatory.

Forcing artists to adhere to a prescribed list of politically correct actions and ideas in the name of diversity is a blow to art and a sure way to water down and sully the work even of the people belonging to the underrepresented groups they seek to promote.

Will it now be impossible for a historical film to win the Best Picture Oscar without distorting the truth or engaging in absurdity to reach the minimum quota?

It’s notable that a historical movie like “1917,” about two British soldiers fighting in World War I, might struggle to meet the Oscars’ code, but “Cuties,”  a Netflix movie that sexualizes children with a racially diverse cast of girls, easily qualifies.

Such is the moral spectrum of our global cultural elite, it seems.

David Sims, a staff writer for The Atlantic, suggested that there are so many ways for studios to comply with the new rules that there is simply “no excuse” not to follow them.

“The academy has introduced a new standard of accountability in an industry where financial success—which can be boosted by a Best Picture win—is the only real yardstick by which everything is measured,” Sims wrote. “The Oscar rules themselves may not be rigorous, but they’re Hollywood’s latest concrete step toward what could be significant change.”

Of course, it’s easy to see how studios may cleverly hit the bare minimum requirements by adding pointless scenes, fulfilling most requirements off-screen, or using other gimmicks to make sure the quotas are met.

If that’s the case, will the standards then become more extensive and draconian?

The bottom line is, a checklist quota system is terrible for the art of filmmaking.

It amounts to little more than virtue signaling, another example of how America’s most elite cultural institutions all drink from the same poison of critical race theory and identity politics that was once confined to radical circles in academia.

And in many respects, it’s outright insulting to talented actors, who now must wonder if they are simply being used to fulfill the quotas.

On top of that, the monomaniacal obsession with race and gender will further diminish the universality of great art and will further silo Americans into various groups, rather than help us understand our common humanity and human nature.

If there’s a silver lining to the Oscars’ forthcoming quotas, perhaps it will further loosen Hollywood’s grip on America’s cultural imagination and lead to a rebellion against the ideologically calcified, increasingly predictable wokeness we’ve become so accustomed to from La La Land.