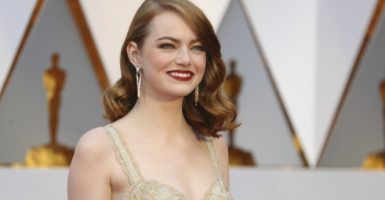 Once again, Hollywood showcased its complete lack of diversity in thought at the Oscars.

Of course, it’s a free country, and Hollywood is fine to keep its liberal streak going … just as conservatives can continue to decide whether they want to support new movies.

But it does suggest that there might be a lot of fine stories left untold and moral dilemmas left unexplored, because Hollywood limits itself to such a narrow mindset.

Dakota Johnson is showing her support for Planned Parenthood at the #Oscars! #IStandWithPP pic.twitter.com/09VwiNNPxI

If you are among the half of all voters who supported Trump for president, Kimmel wasn’t interested in winning your support. The late-night host made several cracks about Trump, including: “This broadcast is being watched live by millions of Americans and around the world in more than 225 countries that now hate us.”

“I want to say thank you to President Trump. Remember last year when it seemed like the Oscars were racist? That’s gone, thanks to him,” Kimmel also said.

“My absence is out of respect for the people of my country and those of the other six nations who have been disrespected by the inhumane law that bans entry of immigrants to the U.S.,” Asghar Farhadi, who didn’t attend the Oscars, said in a statement read out loud when his movie, “The Salesman,” won for best foreign language film.

“Dividing the world into the ‘us’ and ‘our enemies’ categories creates fears. A deceitful justification for aggression and war. These wars prevent democracy and human rights in countries which have themselves been victims of aggression,” Farhadi added in his statement, which got a warm reception from the audience.

Right—because of course, it’s crazy to hit pause on people from seven countries considered terrorism hot spots entering the United States. The only possible reason could be inhumanity, not a desire to protect the security of American citizens.