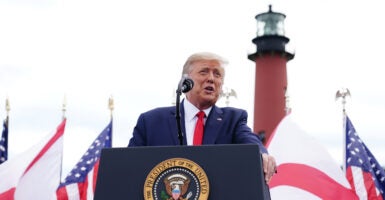 Before expanding a moratorium on offshore drilling Tuesday near the coasts of Florida, South Carolina, and Georgia, President Donald Trump invoked the legacy of another brash New Yorker known for rattling the political establishment during his presidency.

Trump’s order extending the drilling moratorium came a month after he signed the Great American Outdoors Act, which the president said was the largest investment in national parks since President Theodore Roosevelt’s time in office.

During the event in Jupiter, Florida, Trump recalled that members of Congress told him after he signed the legislation into law that it will “make you the No. 1 environmental president since Teddy Roosevelt.”

“So, I said, ‘Why does it only have to go back to Teddy Roosevelt, which is over 100 years. Why can’t we say from George Washington, right from the beginning?’” Trump recalled. “They said, ‘Well, we’re not quite there yet. But one other bill like this and we’ll be there.’”

After his remarks, Trump signed the order extending the moratorium on offshore drilling on Florida’s Gulf Coast to the Atlantic Coast of Florida, Georgia, and South Carolina.

During the Florida speech, Trump noted that his policies have been effective, in contrast with liberals’ proposals that he said are “all talk and no action.”

“The left’s agenda isn’t about protecting the environment, it’s about punishing America,” the president said. “Instead of focusing on radical ideology, my administration is focusing on delivering real results, and that’s what we have.”

Trump recited several administration actions, including $100 million to fight toxic algae to safeguard coastal areas; more than $500 million to fix the Herbert Hoover Dike around the waters of Florida’s Lake Okeechobee; and increasing funding for Everglades restoration by 55%.

“We now have the cleanest air we’ve ever had in this country,” Trump said, before putting a qualifier on the word ever.

“Let’s say over the last 40 years, because I assume 200 years ago it was probably better, what do you think? I do want to preface that, because the fake news is back there.”

Trump said he has safeguarded the environment without sacrificing the economy by keeping fuel and energy costs low.

“You are at a level of [lower] cost now with your electric and so many other things caused and created by energy in fuel, the likes of which you haven’t seen in 30 years,” Trump said. “As president, I’ll defend our environment. I’ll defend our workers and our cherished way of life.”