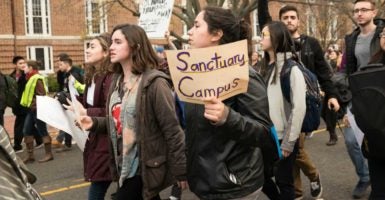 “It’s a simple equation: If you don’t follow the law, the state funds are not going to follow you,” Georgia state Rep. Earl Ehrhart, R-Powder Springs, told Ainsley Earhardt and Pete Hegseth on “Fox & Friends.”

Students and faculty at Emory University, a private university in Georgia, are petitioning to make their college one of these safe havens, Fox News Insider reported.

“We urgently demand concrete actions by Emory University to protect all students—especially our undocumented students at the college and in graduate programs,” the petition says.

Emory’s president says the school is reviewing a proposal to become a sanctuary campus.

“This lawmaker is correct,” Hans von Spakovsky, a senior legal fellow at The Heritage Foundation, told The Daily Signal. “Sanctuary policies are intended to obstruct federal immigration laws and are a sign of contempt for the rule of law.”

“Such campuses should not receive federal funds any more than campuses that violate federal civil rights statutes,” von Spakovsky added.