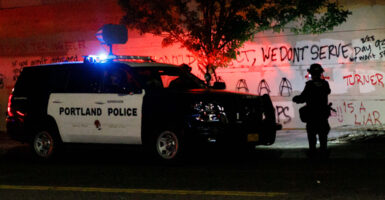 Our media and political class have been captured by radicalism that has bubbled under the surface of left-wing politics for decades. Pictured: Rioters spray graffiti and start fires Friday night at the police union building, in Portland, Oregon, the 93rd consecutive day of violence there. (Photo: John Rudoff/Anadolu Agency/Getty Images) 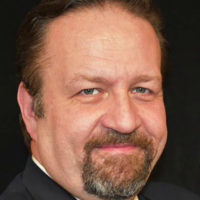 My father always liked to tell me: “Politics, a truly filthy business. But my, is it interesting.”

And he was right.

For those of us who live and work in the “swamp,” we get daily reminders of that reality. It’s easy to fall into a belief that politics is just a cycle.

For four or eight years, one side is in ascendance. One side influences the course of the nation and American lives, and then it’s the other side’s turn.

To understand how things have changed, you need to understand what real life and death issues beneath the surface of American life compelled many Americans, for the first time since the Revolutionary War, to check the box in 2016 for someone who had nothing to do with Washington, D.C., or our political class.

The choice seemed unusual at the time—instead of a governor, general, senator, or congressman, a construction magnate with 14 seasons of a reality TV show behind him somehow had garnered 304 votes in the Electoral College, not to mention almost 63 million votes, in his first run for the White House.

To answer that, you need to read the autobiography of a man whose experience is crucial to understanding why voters felt compelled to make that kind of choice.

That man is J.D. Vance and the book is “Hillbilly Elegy.”

I don’t read biographies, auto- or otherwise, as I just don’t have the patience. But thanks to the recommendation of someone in the White House, I made an exception and read Vance’s story over one Thanksgiving weekend and it changed everything.

Why? Because Vance’s book fully explained the life and death issues that made such a choice even possible.

Ostensibly, the work was about Vance’s growing up in Ohio, a member of a working-class family from the Appalachian region of Kentucky in an environment of dashed dreams, drug abuse, and broken human beings.

For the full story, read Vance’s book. The deeper conclusion is that America became a land of opportunity and the world’s sole superpower because a promise was made and kept between its citizens and the political class. That promise was based upon a common belief: America is the freest and greatest nation on God’s Earth.

Both groups—citizens and the political class—believed in our being the “great experiment in democracy.” That if you worked hard, you would prosper. That you would be represented by a political class that would protect that prosperity and keep your family safe.

But then the compact was broken. Year after year, those who had built America were systematically betrayed. Jobs disappeared. Factories closed.

Our enemies and competitors—namely China—were given favorable deals. Drugs like fentanyl were “imported,” ravaging our communities. In exchange, more and more of the “elite” in Washington subscribed to an inexorable “managed decline” for America.

We have been able to surmount some of these issues in the time since then with a roaring economy until COVID-19 hit, jobs returning to America, and foreign policy successes such as smashing the ISIS caliphate.

But our political clashes now go much deeper and are more existential. They are rooted in issues that those who occupy the commanding heights of our media and our traditional political class have no interest in addressing.

These issues strike deeply at our social compact—the shared commitment to Anglo-American values, norms, customs, and traditions, available to Americans of any background—that give us common ground and make a modicum of a free, orderly, decent, and healthy political order even possible.

These same panjandrums of our media and political class, and the street thugs they have enabled, the rabble-rousers performing this dangerous political street theater in tearing down our statues and history, no longer are practicing politics as usual. They have been captured by the radicalism that has been bubbling under the surface of left-wing politics for decades.

That is how a rising generation of Americans subscribes to the most extreme policies, including:

—Nationalization of medicine and abolition of private health insurance.

—Destruction not only of statues, but America’s history, customs, norms, and tradition.

—Sanctioned harassment of fellow citizens until they publicly manifest agreement.

—Erasure of America’s history as a force for good in the world, replacing it with a civics education mired in the 1619 Project narrative of America as founded on slavery.

—Defunding our police or doing away with the idea of law enforcement altogether.

These policies will lead to anarchy and further loss of liberty in the freest country the world has ever seen.

We should keep this in mind if America is to remain America.