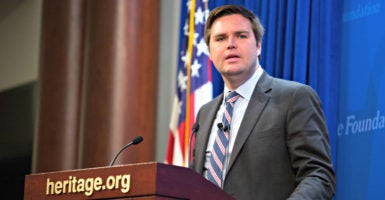 "Our welfare state is not very good at promoting upward mobility," best-selling author and venture capitalist J.D. Vance says in a July 20 appearance at The Heritage Foundation marking the release of the 2017 Index of Culture and Opportunity. (Photo: Willis Bretz for The Daily Signal)

The best-selling writer, speaking Thursday at The Heritage Foundation for the think tank’s release of its 2017 Index of Culture and Opportunity, said conservatives who better understand “broken homes and broken neighborhoods” will reach solutions that get better results.

“We know that we have a crisis of opportunity in the country,” Vance said.

Importantly, he said, Heritage’s index charting societal trends recognizes that the cultural disadvantage of some children “affects their opportunities and affects their likelihood of upward mobility later on.”

As a 4-year-old, Vance recalled, he saw one of his mother’s boyfriends attack her. Two decades later, as a student at Yale Law School, he mistreated his girlfriend and had no idea how to build a marriage and family.

Now Vance is the celebrated conservative sage of the white working class, though he didn’t vote for Donald Trump.

Readers of his memoir, “Hillbilly Elegy: A Memoir of a Family and Culture in Crisis,” know that Vance’s father left home when he was a toddler. His mother, who came from the Kentucky hills and got hooked on hard drugs, would marry five times. He, his mother, and sister were always on the move, and Vance eventually chose to live with his maternal grandmother, as a profile in The Washington Post recounts.

Too often, Vance said at Heritage, those with more advantages blame and condemn the poor, the jobless, the addicted, and the preyed upon for their condition. He said:

Those cultural questions cannot and I think should not be layered with moral condemnation. And the fact that they often are, I think, has destroyed some of the real political capital that conservatives have in talking about these issues.

The Index of Culture and Opportunity tracks national data on 31 social and economic indicators related to culture, poverty and dependence, or general opportunity.

“While a number of policy challenges spelled out in the index require policy fixes, nearly all of them call out for community and interpersonal efforts as well,” said Jennifer A. Marshall, who oversees the index as leader of Heritage’s Institute for Family, Community, and Opportunity.

High rates of food stamp enrollment won’t be solved without government requiring a commitment to work, for example. But high recidivism rates for former prison inmates won’t be changed without community involvement to reintegrate them, Marshall said.

Marshall, who introduced Vance, acted as moderator during a panel discussion following his remarks that featured five of the 30 commentators whose short essays accompany the index’s charts and graphics. She said Vance, whose family roots are in the Kentucky Appalachians and whose memoir became a surprise best-seller last summer, “captured our country’s unsettled moment better than any other description.”

Vance grew up in the Appalachian town of Jackson, Kentucky, and in Middletown, Ohio, a Rust Belt town where he went to public school before entering Ohio State University and joining the Marines.

He singled out the welfare state in response to a high school student who asked how the left’s policy ideas had failed “disadvantaged” Americans.

“The biggest failure, not just on the left but disproportionately on the left, is the failure to recognize that our welfare state is not very good at promoting upward mobility,” Vance said.

But rather than “blow up” the welfare state, he said, conservatives as well as liberals have to be willing to identify successes and failures in public policy and make changes.

Vance recalled how members of his own extended family, Blue Dog Democrats who supported welfare programs that began expanding in the 1960s, came to see that those programs weakened traditional bonds of family, church, and community.

At some point, he said, liberals have to say, “We tried really hard, we were really well-intentioned, but what we tried didn’t work nearly as well as we thought it would.” And too many conservatives, Vance said, unwisely have accepted the 1960s terms of debate and “just want to spend a little less money” on failed programs.

Instead, they should seize the opportunity “to chart an entirely new direction and a new vision.”

Vance, 32, now a partner at the investment firm Revolution LLC and a new father, splits his time between Washington and Columbus, Ohio, where he recently started a nonprofit called Our Ohio Renewal. A contributor to both National Review and The New York Times, he penned the introduction to the new edition of Heritage’s Index of Culture and Opportunity.

Marshall said a primary purpose of the fourth annual index is to “ask the right questions” about cultural and economic factors that shape opportunity in America. Out of that, she argues, should come a better and more productive conversation among Americans. Researchers, academics, journalists, and those in the trenches contribute commentary on each trend and why it matters. Helen M. Alvaré, a law professor at George Mason University’s Antonin Scalia Law School who wrote on divorce, said during the panel discussion that couples continue to choose to live together before marriage, not realizing its statistical connection with divorce.

Cohabitation, rampant births to single mothers, and pornography all are risk factors for divorce, Alvaré said, but “are still perceived to be matters of personal choice, so it’s hard to get at them culturally.”

The Rev. Derek McCoy, executive vice president of the Center for Urban Renewal and Education, who wrote on marriage, said society doesn’t do a good job telling younger Americans about the institution’s “great benefits”—from preventing childhood poverty and delinquency to resulting in personal well-being and more frequent sex.

At the same time, McCoy said, young people need to know that marriage is hard work.

Also on the panel were fellow index commentators William Mattox, who directs an education center at the James Madison Institute; Henry Olsen, a senior fellow at the Ethics and Public Policy Center; and Israel Ortega, a spokesman for the Libre Initiative, which promotes economic freedom among Hispanics. In the index’s executive summary, Marshall notes that:

—Some of the nation’s most pressing challenges “fall outside the typical boundary lines of traditional public policy disciplines,” among them Americans’ growing detachment from work and the opioid addiction crisis.

—Although historically low unemployment appears to be welcome news, danger signs include declines over 10 years in labor force participation and the employment-to-population ratio.

—Student enrollment in charter schools remains on the rise as an alternative to traditional public schools, but the number of charter school startups “has slowed dramatically,” creating “widespread unmet demand.”

The Index of Culture and Opportunity is one of three annual publications from Heritage assessing how the nation is doing in vital policy areas. The others are the Index of Economic Freedom and the Index of U.S. Military Strength.

Elle Rogers contributed to this report.