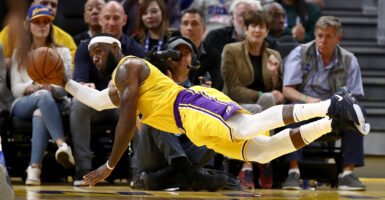 LeBron James of the Los Angeles Lakers dives for the ball during an NBA game against the Golden State Warriors on Oct. 5, 2019, in San Francisco. The management of the Warriors has endorsed a referendum campaign that would end California's ban on affirmative action. (Photo: Ezra Shaw/Getty Images)

A Change.org petition organized online by a group opposed to racial preferences in California is satirically demanding that professional sports teams in the state allocate 15% of their roster spots to Asians.

The petition, which says that would make Asian representation on the teams proportional to California’s Asian population, as of Aug. 28 has collected more than 3,500 signatures.

The petition was organized by Jason Xu (no relation to the author), a member of the No on 16 campaign, which was started to oppose California Proposition 16, a ballot measure that would repeal Proposition 209, California’s nondiscrimination ordinance passed in 1996.

Proposition 209 added the following language to the state’s constitution:

The state shall not discriminate against, or grant preferential treatment to, any individual or group on the basis of race, sex, color, ethnicity, or national origin.

Proposition 16 would legalize racial preferences for what its backers call “underrepresented minorities” (that is, blacks and Hispanics) in college admissions, government hiring, and public contracting, which is currently banned under Proposition 209.

The petition was spawned by a recent San Francisco Chronicle article that stated that the Bay Area’s seven professional sports teams have all lined up to endorse Proposition 16. The NFL’s San Francisco 49ers and the NBA’s Golden State Warriors are among those teams.

Although the petition is facetious in nature, it sheds light on some uncomfortable truths about the racial-preferences ballot measure.  The justifications for racial preferences in college admissions and hiring are said to stem from the desire to increase “equity” and representation for so-called underrepresented minorities.

But in pro sports, those minorities—blacks, in this case—could be said to be overrepresented. The NBA is 75% black, while the NFL is 70% black. Asians of any nationality make up just 0.2% of the NBA players and just 1.9% of the NFL’s.

One of the comments by one of the signers of the petition reads: “Yes – it is my lifelong dream to play for the NBA although I am 5’ tall.  I hope they will make special consideration for me, as Asians are underrepresented in the NBA and MLB.”

Ward Connerly—the leader of the original Proposition 209 campaign to ban racial preferences in the state back in 1996 and who is himself black—is the president of the No on 16 campaign.

Connerly released a statement that read:

Americans oppose discrimination of all kinds and want government to treat everyone equally.

That is what Title 6 of the 1964 Civil Rights Act so clearly explains, and this is why grassroots activists all across the country are fighting for equal treatment in the most proud institutions of American life.

The implications of reimposing racial preferences in California are potentially enormous, and no community has advocated against them more passionately than the Asian American community.

Asians have done car rallies, protests outside the state Capitol, and media campaigns to publicize the dramatic effects that racial preferences would have in increasing the racial divide and exacerbating divisive “identity politics.”

“I want people to judge me by the content of my character, not the color of my skin,” Xu said.