Let the Susan B. Anthony Statue Stand Tall—and Trump’s Pardon of Her to Stand 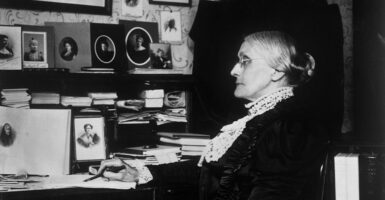 Susan B. Anthony, the president of the National Woman Suffrage Association from 1892 to 1900, died in 1906, 14 years before women won the right to vote. (Photo: Corbis/Getty Images) 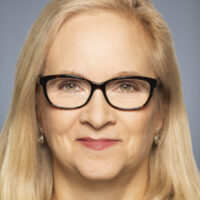 The statue effort has been in the works for six years. According to the organizer’s website, Monumental Women was officially created “as an all-volunteer, not-for-profit organization in 2014 with the initial goal of breaking the bronze ceiling and creating the first statue of real women in Central Park’s 167-year history.”

The website notes that Central Park has statues of “Alice in Wonderland, Mother Goose, Juliet with Romeo, witches, nymphs, and angels—but no real women … until now.”

The question, given today’s climate of destroying statues and rewriting history, is how long will Anthony stand?

The left already has begun trying to topple her, in part because President Donald Trump pardoned her Aug. 18 on the 100th anniversary of passage of the 19th Amendment granting women the right to vote.

Anthony cast her vote in the presidential election of 1872, at a time when the law permitted only men to vote. She was subsequently arrested and fined $100.

But Anthony was never pardoned—until last week—and because it was Trump who rectified this injustice, the left is incensed. Indeed, the left would rather send Anthony down the memory hole than see her praised by Trump.

The New York Times argued that Anthony is “an increasingly divisive figure, adopted by anti-abortion forces and criticized for relegating Black suffragists to the sidelines.” The assessment of Anthony as a divisive figure was echoed by The Huffington Post.

As [the] highest-ranking woman elected official in New York and on behalf of Susan B. Anthony’s legacy, we demand Trump rescind his pardon. She was proud of her arrest to draw attention to the cause for women’s rights, and never paid her fine. Let her Rest In Peace, @realDonaldTrump.

Similarly, Deborah Hughes, the executive director of the Susan B. Anthony Museum and House, issued a statement condemning Trump’s pardon, saying that the move threatened to “validate” Anthony’s 1872 arrest.

Hochul and Hughes both justified their rejection of Trump’s pardon for Anthony on the grounds that she herself wouldn’t have wanted it, but the historical record does not back them up.

As noted by the U.S. attorney for the Western District of New York in a press release: “In January of 1874, Anthony petitioned Congress to remit her fine, but a bill to do so did not pass.”

Now, in addition to Anthony’s formal pardon by the president, and the unveiling of her statue in New York City, she is rightly honored—but for our sakes, not for hers.

Anthony, who died in 1906, worked for more than 50 years on behalf of abolition, equal pay for equal work, and a woman’s right to vote. She traveled around the country giving speeches and gathering signatures at a time when travel was not easy and women were not expected to play a public role.

It was 48 years from the time of her arrest to the passage of the 19th Amendment, and who knows how much longer it would have taken without her tireless efforts?  Anthony well deserves to be memorialized.

Susan B. Anthony is an American icon who has inspired millions of women across the Nation through her advocacy and accomplishments, and the generations of Americans who have devoted themselves to the work of perfecting our union are forever indebted to her example and legacy.

Memorials serve a vital purpose: They teach us about the past, reminding us of where we have come from, and they inspire us—often through the example of the person commemorated—to continue to work for a better world. The memorial does both.

Let us hope that the left doesn’t deface the memory of Anthony just because she is a hero for all Americans, not just them.