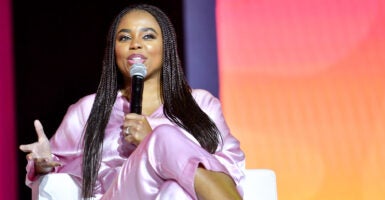 Jemele Hill speaks at the 2019 ESSENCE Festival at the Ernest N. Morial Convention Center July 5, 2019, in New Orleans. Hill has compared the history of the United States to Nazi Germany. (Photo: Paras Griffin/Getty Images for ESSENCE)

Apparently, America is no better than Nazi Germany, according to some members of our media “elite.”

Jemele Hill, who writes for The Atlantic and is a producer for ESPN, tweeted that people are wrong to think that Adolf Hitler’s Third Reich was worse than the United States. According to Hill, she came to this conclusion after reading “Caste: The Origins of Our Discontents,” a new book by author Isabel Wilkerson.

The book, endorsed by billionaire celebrity Oprah Winfrey, argues that the United States has a racial caste system built on white supremacy comparable to India’s.

It also makes comparisons between the United States and Nazi Germany.

To describe the injustice of slavery in the United States and the racism that has occurred in this country, often in tandem with unjust laws, in direct comparison to Nazi Germany is both absurdly off the mark and intellectually lazy.

Yes, racialist ideology developed in the United States alongside countless other countries in the early 20th century, but there is still a wide gap between generally unjust, racist laws and the death camps of the Third Reich, orchestrated by one-man rule dictatorship.

Somehow, these distinctions are becoming difficult for the American pseudo-elite to understand.

Some pundits and politicians have ignorantly drawn comparisons between Antifa protesters, the so-called “anti-fascists,” and the American GIs who stormed Normandy on D-Day. But the U.S. military at the time was still segregated. Were those American soldiers no better than the Nazis they had been sent to defeat? Was there really no distinction between the two sides?

American injustices often seem stark and unforgivable because they occur within the context of a largely free and prosperous society. When the United States was founded, it was built on a system of freedom and consent hardly imaginable the world over.

Slavery, oppression, repression, and absolute despotism were so common across the globe as to be unremarkable. Even the “peculiar institution” of slavery was hardly unique to the United States.

About 90% of slaves taken from Africa during the long history of the trans-Atlantic slave trade went to the Caribbean and South America—only 6% came to British North America.

The U.S. ended up with a much larger black population compared to the rest of the Americas in part because mortality rates were much lower, and many slaves had families and children.

The black and white “caste” system that developed in America because of the reality of slavery was hardly unique.

In Haiti, for instance, where a slave revolt eventually led to a genocide of white residents in 1804, a complicated caste system was created from the various black and mixed-race people on the island. Racial enmity and corrupt governance led to revolutions, revolutions led to pogroms, and the cycle repeated over and over again.

This is not to mention the various hierarchical systems that have existed in virtually every civilization. They’ve been based on race, religion, wealth, class, and every other distinction imaginable.

In Europe, serfdom was ubiquitous throughout the Middle Ages. Freedom was marginal, and even further reduced under monarchs who consolidated their holdings and claimed a divine right to rule.

The creation of the United States was a reversal of that trend.

And the various monarchies and governments of Europe were hardly alone in creating brutal, tyrannical systems of unjust government. In Europe, there was a divine right of kings, in China and in much of Asia there was the Mandate of Heaven, which often led to its own kind of absolutism.

Under China’s Qing Dynasty, which ruled from the 1650s until the early 20th century, the Manchus ruled over the much larger Han Chinese population, with the emperor holding absolute despotic power over the powerless masses.

Under such rule, the concept of self-government was essentially unimaginable.

In the Middle East and North Africa, a ruthless religious caste system developed under Muslim rulers and societies. Religious minorities were second-class citizens at best and were often subject to violence or enslavement.

In fact, according to historian Robert Davis, between 1500 and 1650, more white Christian slaves were taken to Barbary North Africa than Africans were taken to the New World. This practice remained common until modernity, where Western power and anti-slavery sentiment brought it nearly to extinction.

“One of the things that both the public and many scholars have tended to take as given is that slavery was always racial in nature—that only blacks have been slaves. But that is not true,” Davis said, according to an Ohio State News report in 2004. “We cannot think of slavery as something that only white people did to black people.”

In the Americas, indigenous people practiced slavery on a small and widespread scale. Plains Indians, like the Sioux, Comanche, Apache, and countless others, took slaves as a natural product of conquest in war.

And slavery was perhaps the better outcome for captives, who were frequently tortured to death.

The Eastern tribes, such as the Cherokee, adopted racial slavery and built plantations along with most of their neighbors. The Cherokee Constitution of 1839, unlike the U.S. Constitution, specifically addressed and upheld race-based slavery, even preventing tribe members from teaching black citizens—slave or free—to read or write.

This is just the tip of the iceberg regarding the unfairness, injustice, and inhumanity of man in relation to man throughout history.

Mankind is fallen, a fact unchanged by the progress of technology and science, as the Nazis well demonstrated. Human beings both primitive and modern have enormous capacity for evil.

America is special not because Americans are a special breed of people free from the sin of Adam, but because we have a system that acknowledges the negatives of human nature while channeling our good and bad traits toward positive ends.

There is a reason why people of all backgrounds have flocked to come to the United States rather than flee as the did from the USSR and Nazi Germany, and countless other less malignant governments in history.

Minorities of all kinds, of all backgrounds, ethnicities, and religions have come to this country. They have done this even in the face of discrimination because they knew that opportunities existed here as they didn’t in their original homeland.

We are a land of hope and opportunity, even for those we’ve treated the worst.

America wasn’t and isn’t perfect. Success couldn’t be guaranteed. But it was worth the risk.

In America, unlike most societies through history, we’ve had the unique advantage of living under the Constitution with the timeless principles of the Declaration of Independence ingrained in the hearts and minds of the American people.

Unjust institutions were inherited, and some were even created in this country, but in our system of free debate and self-government we’ve been able to do away with them through elections and laws. The American system liberated men and women from bondage and lifted people, once oppressed, to the heights of success and prosperity.

Oprah Winfrey, of all people, should know that.

Is that a country comparable to Nazi Germany?

There can be little doubt that a world held at the mercy of the Third Reich, an Imperial Japan, or a USSR would likely fall into a global dark age where humanity is re-enslaved rather than liberated.

To compare America, even at its worst, to Nazi Germany is ignorant. It’s also offensive to both those who were victimized by that evil regime and the countless Americans who fought and gave their lives to put it in the ash heap of history.

The attempt by America’s elite education and media institutions to reconfigure and rewrite America’s past into something unloveable and indefensible is making it difficult for Americans to draw real distinctions between our own faults and failures and those prevalent through much of human history.

It threatens to shred the concept of e pluribus unum, out of many one—essential to bind together a diverse nation like ours together. It also makes it difficult for Americans to understand or draw a distinction between our country and one ruled, for instance, by the Chinese Communist Party.

Informed patriotism, and a basic understanding of civics and history, are desperately needed to combat the absurdities of the current war on history and the increasingly ridiculous iconoclasts who look to tear down our past by the root.