Trump Suggests a Presidential Election Redo. Is That Possible? 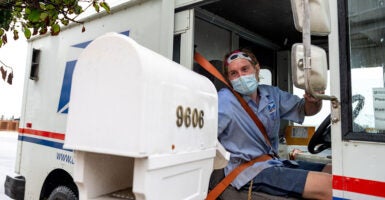 The fact that the American people have only one chance to hold our national presidential election makes it all the more important that we get it right. Pictured: A Postal Service worker delivers to a mailbox Aug. 13 in Ventnor City, New Jersey. (Photo: Alexi Rosenfeld/Getty Images)

President Donald Trump has pointed out correctly that mail-in elections can be plagued with fraud and other serious problems, making it impossible to know who the winner is in a close race.

But can these problems require that we hold the November presidential election a second time, as he suggested Tuesday might be necessary?

Answering a question from a reporter about problems with mail-in voting, Trump said:

You can’t take millions of ballots, send them haphazardly all over the country, or all over a state, and expect it to come out properly. … It’ll end up being a rigged election, or they will never come out with an outcome. They’ll have to do it again, and nobody wants that.

“And I don’t want that,” the president added.

However, there aren’t any laws in place providing for holding a presidential election a second time on a national level. Such a redo of a presidential race has never happened in American history.

There is a remote possibility that there could a redo of an election in an individual state if the problems are so grave that it can’t be determined who won in the state. New elections have been ordered in local and sometimes even state and congressional races when serious questions have been raised about the outcomes.

Although this has never happened in a presidential election in an individual state, we can’t say it is impossible, if ordered by state officials.

The fact that the American people have only one chance to hold our national presidential election makes it all the more important that we get it right. The valid concerns Trump and others have raised about problems with mail-in voting must not be dismissed as baseless by Democrats and many in the media.

As Trump correctly stated, problems with all-mail elections are “not a political issue, it’s really about a correct vote.”

“Win, lose, or draw, we have to get it right … we have to have honest voting,” the president said.

This should be something all Americans agree on, regardless of political party.

Yes, we have to have honest voting. Neither the president nor the electorate at large wants to have a chaotic election with problems caused by the misdelivery of ballots, fraud, and rejection of absentee and mail-in ballots.

These problems would cause a long delay in determining the winner of the presidential race, resulting in a lack of public confidence in the validity of the outcome of the election.

I’ve written before about the vulnerabilities of voting through the mail. Such ballots are voted outside the supervision (and protection) of election officials and outside the observation of poll watchers. They are the easiest ballots to steal, forge, alter, and falsify.

Mail ballots also make elections subject to the efficiency and effectiveness, or lack thereof, of the U.S. Postal Service. All of the recent primaries in places such as Wisconsin, Maryland, New York, and the District of Columbia have had problems with thousands of absentee ballots not being delivered to voters at all or in time to be voted.

The U.S. Election Assistance Commission has reported that in the last four federal elections, over 2 million absentee or mail-in ballots were misdelivered.

The same Election Assistance Commission reports show that over 1 million ballots completed by voters and returned were rejected by election officials.

In New York’s recent primary, one in five ballots was rejected–an enormous and unacceptable disenfranchisement rate for voters.

Absentee ballots always have a higher rejection rate than votes cast in-person because there are no election officials in voters’ homes to resolve problems or answer questions on how to comply with a state’s voting requirements. So the more people vote by mail, the more voters will be disenfranchised.

The president also expressed his concern Tuesday about “millions and millions of ballots sent all over the place, sent to people that are dead.”

In fact, voter registration rolls all over the country are in terrible shape because states are not doing a good job of maintaining their accuracy by removing the names of voters who have died, moved away, or have duplicate registrations.

Picture millions of ballots arriving through the mail in neighborhoods all over the country for people who no longer live at the addresses where they are registered. Or picture individuals receiving multiple ballots because they are registered more than once.

These are very real and very serious problems. This is why promoting widespread mail-in voting is just asking for trouble.

Just ask the four individuals in Paterson, New Jersey, who recently were charged with criminal election fraud. Paterson officials decided to have an all-mail municipal election that resulted in so many problems that–in addition to the criminal charges–the candidates in at least one race have agreed to a do-over.

New York took more than six weeks to count votes in its primary, which saw a huge increase in mail-in ballots. And those results also are being disputed over the high rejection rate of completed ballots.

Imagine how long it would take to count absentee ballots in the November election all around the nation with much a higher turnout.

The way to avoid that kind of chaos is for election officials to open the same number of polling places as they have opened in prior presidential elections, with all of the health safety protocols recommended by experts, so Americans can vote in-person.

Those who are too sick or disabled to vote in-person, or most vulnerable to COVID-19, should be able to vote by absentee ballot. But we don’t need all voters to cast their ballots by mail, because that opens the door to too many problems.

The rest of us should keep our right to vote in-person and to see our ballot dropped into a ballot box. That’s far preferable to hoping a mail carrier delivers the ballot in time, and taking the risk that the ballot will be otherwise intercepted, changed, or altered on its way back to election officials.