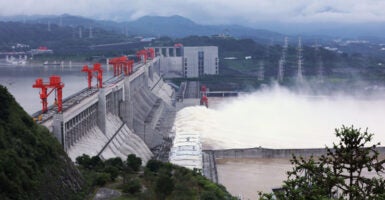 As if 2020 has not been sufficiently crisis-laden for the People’s Republic of China, it now faces the potential for major catastrophe due to massive rains.

For much of the past several weeks, central China has been inundated by massive rainstorms, which have generated the country’s third major flood for 2020. The massive runoff into the Yangtze has led to concerns that the Three Gorges Dam will be overstressed beyond its capacity to withstand the inflow.

These concerns were not allayed when the state-run Xinhua News Agency reported that there had been “displacement, seepage, and deformation” (translated from “weiyí, shenliu, bianxíng”) in the dam structure. Although these threat indicators are reportedly within normal parameters, there is still fear that the dam will collapse.

Whether or not there is a dam collapse, the flooding of the Yangtze will have enormous effects in China and beyond, especially since the threat of dam collapse coincides with several other domestic crises.

Throughout its history, Chinese governments have sought to tame its rivers. The Yellow River, the second-longest in China, has long been known as “China’s Sorrow” because of the various floods that have devastated communities along its 3,400-mile length. As the South China Morning Post has reported,

Discounting famines and pandemics, the 1931 central China floods are generally considered the deadliest natural disaster of the 20th century. More than 140,000 people drowned, with at least 3.7 million dying over the nine months that followed.

As a result, various Chinese governments of all ideological stripes have sought to harness the power of China’s rivers while also limiting their ravages. The result has been centuries of dams, levees, canals, and dikes.

The nongovernmental organization International Rivers estimates that China has some 87,000 dams. These have been built to control flooding, aid in irrigation, redirect the flow of rivers (especially to northern China, which has been suffering water shortages in recent years), and to generate electrical power.

The Three Gorges Dam is perhaps the most well-known of all of these dams. It was given this name because of its location, near three scenic gorges along the Yangtze.

The idea of building a dam at or near this location was first broached by Sun Yat-sen, the father of modern China who overthrew the Qing Dynasty. Sun envisioned a massive hydroelectric installation that would help electrify central China and catapult the nation into modernity.

Both Chiang Kai-shek’s Nationalist government and planners from imperial Japan, who hoped to add China to the Japanese Empire during World War II, examined the area with the intent to harness the river.

In the end, it was not until 1994 that ground was broken for the current dam.

Completed in 2008, the dam is 185 meters tall and 2,309 meters wide. The waters from the dam power 34 generators, with a total of 22,500 megawatt output, making the Three Gorges Dam the world’s largest hydroelectric generating facility.

In addition to generating electricity, the dam is also intended to help control the flow of the Yangtze as part of the flood-control system for the entire Yangtze basin. By adjusting how much water makes it into the middle and lower reaches, the Three Gorges Dam helps limit flooding of such cities as Wuhan and Nanjing.

At the same time, the dam has also helped make the entire Yangtze a navigable river from Shanghai on the coast all the way to Chongqing (Chungking), deep in central China. The resulting reservoir is some 660 kilometers long.

The Three Gorges Dam is only one of several dams built along the Yangtze. Although its reservoir is one of the largest, dams further upstream are often taller. The entire network needs to hold and release water in coordinated fashion in order to ensure that downstream reservoirs and overflow lakes are not overwhelmed all at once.

This is becoming a problem in 2020, because the entire Yangtze River basin, including rivers that feed the main Yangtze, have been subjected to an unprecedented series of massive rainstorms. As a result of the massive inflow of water, upstream dams are themselves under increasing stress, as flooding inundates their catchment areas.

To relieve the pressure, the Chinese have gone so far as to demolish a part of one small dam in nearby Anhui province that held back one of the tributaries feeding into the Yangtze. But opening the spillways on upstream dams would only increase the volume of water sluicing into the reservoir held back by the Three Gorges Dam.

The ongoing flooding raises several challenges for the authorities in Beijing.

Economic. Downstream from the Three Gorges Dam, the Yangtze flows through a number of major Chinese urban centers, including Wuhan and Nanjing, before reaching the sea at Shanghai.

The current flooding has already led to 140 deaths and 2 million displaced persons as cities and towns along the Yangtze and its tributaries have been evacuated. Millions more have been affected as farms, mines, and other businesses have been hit by floodwaters.

The flooding has affected China’s economy, as businesses have lost inventory and production has been delayed. Similarly, transportation links across China have been disrupted, leading to not only local and regional but national repercussions.

Farther afield, the massive scale of flooding is affecting a range of supply chains. Deliveries of personal protective equipment from China, for example, may be delayed by as much as three weeks to a month, due to flooding of production centers as well as transportation links that would move equipment to shipping ports.

Disease. Notably, the floods are affecting Wuhan, the epicenter of the COVID-19 epidemic. The evacuation of hundreds of thousands of residents potentially affects the ability to maintain social distancing, lockdown, and other measures intended to curtail the spread of the virus. Where the evacuees are relocated to is also likely to affect the ability to maintain quarantine behavior.

China’s socialized medical system means that individuals are largely tied to their home village for provision of medical benefits. (The same applies to most other social welfare measures.) It remains to be seen how the flooding of hospitals, and displacement of persons, will affect the provision of medical care in the face of both rising waters and COVID-19.

Political. President Xi Jinping faces a “perfect storm” of political challenges. The COVID-19 crisis hit just as China was about to resolve at least some aspects of the trade war with the United States.

The COVID-19 shutdown imposed on China led to a massive economic hit, including an unprecedented 6% drop in China’s gross domestic product. While this is not the fault of Xi per se, leaders of all political stripes typically get blamed for economic downturns and other economic problems such as unemployment and inflation.

For millions of Chinese, already facing economic hardship, to now have to evacuate due to flooding will only further stress the ability of the Chinese Communist Party to maintain order—and for Xi to maintain the aura of supreme leadership.

This is potentially exacerbated by foreign challenges. It can do Xi little good to have a number of European states declare that Huawei will not be allowed into their 5G networks. The Trump administration’s flurry of speeches, coupled with a constant procession of indictments of Chinese nationals and officials for espionage, further increases the pressure on Xi and the rest of the Chinese Communist Party’s Politburo.

Thinking the Unthinkable: A Failure of the Three Gorges Dam

This entire situation pales should the Three Gorges Dam itself fail. This is a scary but not impossible scenario. A Chinese dam in Guangxi collapsed earlier in July. While there were apparently no deaths, there was, not surprisingly, extensive flooding. Interestingly, there has been little reporting in China’s domestic media about this dam collapse.

Should the dam fail, a massive torrent of water would sweep down the Yangtze. While there are several major lakes downstream that serve as partial flood control measures, the sudden release of the millions of cubic meters of water from the reservoir behind the Three Gorges Dam would rapidly exceed their capacity.

The loss of life in the event of such a catastrophe would be staggering. Several smaller cities downstream from the Three Gorges Dam have populations in the 4.5-6 million person range. Nanjing has 8.5 million, while Wuhan has 11 million.

The physical damage would be massive. Cities such as Wuhan would be inundated, as would nearby countryside if (as is likely) various levees broke from the massive surge.

The resulting loss of cropland would further tax China’s already stressed food production capacity, which is already being threatened by an outbreak of African swine fever and an invasion of fall armyworm. This, on top of rains and flooding themselves, would raise real questions of China’s ability to feed itself.

The global economic impact would be huge, not only due to supply chain disruptions, but the likely financial effects of such a massive catastrophe. While China could import food to replace flooded stocks, that in turn would create global impacts on world food markets.

It would also mean the reallocation of substantial Chinese foreign currency reserves from other projects, such as the Belt and Road Initiative, which in turn would affect a range of lesser developed countries hoping to improve their infrastructure through Chinese-financed projects.

Recognizing that global crisis management resources are already severely taxed by the ongoing COVID-19 pandemic, it would nonetheless behoove national leaders and heads of international relief organizations to keep a close eye on the weather reports for central China.