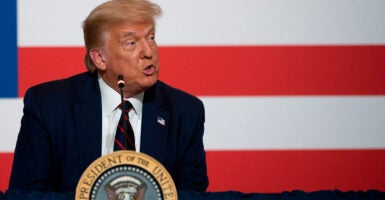 The Trump administration embraced nearly two-thirds of the policy recommendations in The Heritage Foundation's "Mandate for Leadership" in its first year in office in 2017. (Photo: Jim Watson/Getty Images)

The Heritage Foundation on Thursday released the 2020 edition of its annual “Mandate for Leadership,” a blueprint of conservative public policy suggestions.

“The Heritage team’s all-in effort to create these critical tools is something I am very proud of,” said Heritage Foundation President Kay C. James, adding:

The Reagan administration adopted nearly half of ‘Mandate for Leadership’ recommendations in its first year, and the Trump administration embraced nearly two-thirds in 2017.

The Heritage Foundation is committed to ensuring these policy proposals and well-considered recommendations continue to shape our federal government.

The first “Mandate for Leadership,” which contains Heritage’s policy recommendations for presidential administrations, was released in 1981, the first year of the Reagan administration.

The mandate “delivers a clear, unified policy vision for Congress and the White House centered on upholding the Constitution and on building an America where freedom, opportunity, prosperity, and civil society flourish,” Heritage said in a press statement announcing its release.

The original 1981 edition was given to President Ronald Reagan’s transition team, and was also included in The Washington Post’s paperback bestseller list, which said it “became a bible of sorts for many in the Reagan White House.”

Thomas Binion, Heritage’s vice president of government relations, hand-delivered a copy of the “Mandate for Leadership” to White House Chief of Staff Mark Meadows in May.

“Thank you and thank Mrs. James and all the folks at Heritage, not only for the wonderful gift. I will hand-deliver it to the president of the United States—but perhaps the 2020 ‘Mandate’ can be a blueprint for what happens in a second Donald J. Trump term,” Meadows said.

This article has been corrected to reflect how often “Mandate for Leadership” is released.