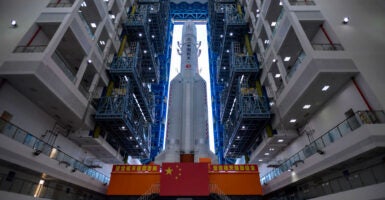 China plans on sending a Tianwen-1 probe to Mars on July 23. Pictured: A Chinese Long March 5 rocket is prepared for a launch in Wenchang, China, July 17. (Photo: STR/AFP/Getty Images)

Among other things, 2020 has been marked by a major revival of the Space Age, almost a Space Age 2.0.

Unlike the first Space Age, which was dominated by the two superpowers, this is a far more democratic Space Age, as more and more countries participate in aspects of spaceflight. Many of these are Asian nations.

This week has seen South Korea deploy its first military satellite, making the Republic of Korea the 10th country to deploy a dedicated military communications satellite.

In addition, both the United Arab Emirates and the People’s Republic of China are launching missions to Mars.

The United Arab Emirates’ al-Amal (“Hope”) probe was launched atop a Japanese H-2 rocket from Japan’s Tanegashima launch center. It will orbit Mars for two years while examining the red planet’s atmosphere.

China’s Tianwen-1 probe is set to launch on July 23. China’s first spacecraft to travel to another planet (having already visited the moon), it will include both a lander and a separate rover the size of a small golf cart.

Not all space efforts have been successful. The Chinese Kuaizhou-11, a solid rocket booster managed by the commercial company ExPace, failed while trying to launch two Chinese-made commercial satellites.

The Kuaizhou, based on the system that also launches China’s anti-satellite weapons (tested in 2007), marks China’s efforts to expand its space industrial efforts beyond the two state-owned enterprises that have dominated for the past five decades.

The different groupings of satellites and space launches underscore the far more networked and interrelated reality of Space Age 2.0. South Korea’s ANASIS-II, for example, was built by Lockheed Martin, based on an Airbus satellite bus (or chassis), and launched by a SpaceX Falcon-9 booster.

No longer does a nation have to be able to build its own satellites and launch vehicles, and invest in launch and tracking facilities, in order to exploit space.

More and more nations can, and will, be able to purchase equipment and services from an array of vendors, focusing more on space applications (such as communications or earth observation), rather than space operations.

For the United States, the skies are likely to be more crowded, but also filled with more opportunity.