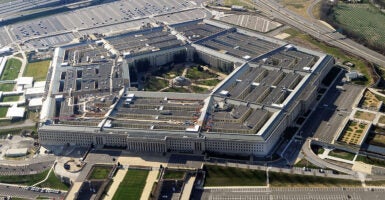 What’s next for the outrage mob? Canceling the Pentagon. Pictured: The Pentagon building in Washington, D.C., Dec. 26, 2011. (Photo: AFP/Stringer/Getty Images)

The radical left demanded that we defund the police, then upped the ante by calling for them to be disarmed.

It started with toppling Confederate statues, then started in on most any cast or carved image—from Christopher Columbus to abolitionists to Mount Rushmore.

Last week, it howled for a boycott of Goya food products after the company’s CEO committed “wrongthink” by daring to say something nice about the president in public.

So what’s next for the outrage mob? Canceling the Pentagon.

The Congressional Progressive Caucus has declared it will oppose the National Defense Authorization Act on the House floor this week unless the defense budget is “meaningfully reduced.” How much does it consider meaningful? A cut of “at least” 10%.

Calling for less spending on defense is nothing new for the left. But what makes this latest demand weird is the “logic” behind it. It’s laughably squirrely.

Historically, progressives have consistently insisted that we spend too much of defense. (Remember “It will be a great day when our schools have all the money they need, and our Air Force has to have a bake sale to buy a bomber.” That decades-old wheeze still plays among those who forget that one of the few constitutionally mandates of the federal government is to provide for the national defense. There is no such provision for education—historically a responsibility of state and local governments.)

Still, progressives argue that defense costs too much. But the cost of defense should rise or fall in proportion to the security threats facing our nation. And, by that measure, it is abundantly clear that we should be spending more—not less—on our defense.

Every year, the national security experts at The Heritage Foundation produce an Index of U.S. Military Strength, a nonpartisan, objective measure of core defense needs versus core defense capability. The latest index shows that, even with increases in funding over the last three years, our armed forces have still not recovered from the damaging cuts engineered during the Obama era.

Those cuts seriously undermined readiness and reduced military capacity. And it’s not just The Heritage Foundation that has reached that conclusion. Military experts both in service and out of uniform agree. And no testimony offered in any of the congressional defense readiness hearings would justify a 10% cut.

It’s a bizarre situation, really. The left vigorously demands justification for spending on defense, then ignores the fully documented justifications and demands steep cuts with no rationale at all. The “at least 10%” is literally a number picked out of the air.

A 10% cut in defense spending may not sound as draconian as “defund the police,” but the result would be about the same. It would be like being able to make your car payments and buy gas, but not having enough to pay for insurance or maintenance: you have a ride, but can’t do anything with it other than watch it rust in the garage.

What is doubly strange about this proposal is that the left is also apoplectic about America’s place in the world. It doesn’t think the administration has done enough to counter China. It insists that the White House is soft on Russia. Then there is Iran and North Korea. It is, of course, wrong.

Current U.S. defense and security policy is stronger than it was four years ago. But it needs to be stronger still—given all the threats that the left acknowledges. Yet, here again, logic seems to have taken a liberal holiday.

One fake suggestion is that by spending less on defense we can spend more on foreign aid and diplomats, solving all our problems just by playing nice. Certainly it would be preferable to resolve all issues without a clash of arms, but it’s not always possible to do so. And, in the real world, it’s easier to win with soft talk when you have a big stick.

The Trump administration clearly prefers to not fight shooting wars if there is a reasonable alternative. On the other hand, it recognizes that nations can’t simply swap out hard power for soft power any more than chefs can substitute eggs for milk in a recipe. They are all part of making the cake.

A steep cut of defense spending would send a devastatingly wrong signal to China and Russia. What we are learning in this outrageous proposal is the depths that progressives will go to embrace, empower, and prop up the most outrageous ideas to show they are the most woke of all in the cancel culture kingdom.